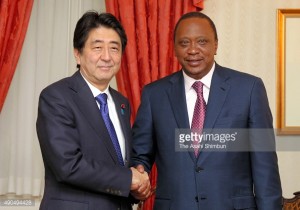 Japanese Prime Minister Shinzo Abe and Kenyan President Uhuru Kenyatta shake hands prior to their meeting[/caption] On September 26, Mr. Shinzo Abe, the Prime Minister of Japan held a meeting with H.E. Mr. Uhuru Kenyatta, President of the Republic of Kenya, at the Waldorf Astoria Hotel from 11:00 a.m. for approximately 40 minutes during his stay in New York for attending the United Nations General Assembly.  The overview of the meeting is as follows: 1 At the beginning of the meeting, President Kenyatta expressed his gratitude for the assistance from Japan since the independence of Kenya in various fields such as energy, agriculture, technical cooperation, education, and construction of ports and roads. Moreover, President Kenyatta expressed his applause for the cooperation from Japan in the field of human resource development in particular. Furthermore, President Kenyatta expressed his appreciation to the assistance from Japan for the peacekeeping training center in Kenya as well. 2 In addition, President Kenyatta expressed his determination that since holding the TICAD VI summit meeting in Nairobi is a symbol of the partnership between Japan and Kenya and Africa, he would make his best efforts for the success of the meeting. In response to this, Prime Minister Abe congratulated the decision that the Tokyo International Conference on African Development (TICAD), which will be held in Africa for the first time next year, will be hosted by Kenya. Prime Minister Abe also stated that he would closely cooperate with Kenya and the two leaders shared the view that they would closely coordinate with each other for the success of the meeting. 3 Furthermore, Prime Minister Abe stated that the Government of Japan would further contribute to peace and stability of the region and the international community as a ”Proactive Contributor to Peace” based on the principle of international cooperation and the ”Legislation for Peace and Security [PDF]”, which had previously been approved, is a specific effort for this purpose. In response, President Kenyatta stated that he strongly supports Japan’s new policy and it is necessary for the international community to proactively face unprecedented threats. 4 In addition, the two leaders exchanged their views to promote bilateral economic relationship and economic cooperation, and to cooperate in the international arena. *APO]]>