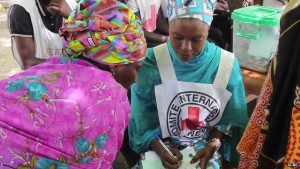 The conflict between Boko Haram and the Nigerian Army has forced more than a million and a half people to flee their homes.  In the north-eastern city of Maiduguri, the number of widows is staggering – 7,000 have registered with many unable to feed their children three meals a day. Aisha Ibrahim Ishaku, mother of seven children, is now a widow and her eldest son is missing.  ““One of child was kidnapped. He was 19 years old then,” she recalls, “They told his father to stay, don’t follow us, but he said my son, my son and followed them.  They shot him in his leg.” Aisha and her children put her injured husband in a wheelbarrow and they all managed to escape. They had to trek 25 km to reach the nearest hospital. Aisha’s husband’s diabetes aggravated the gunshot wound and he passed away five months ago.   http://imedia8uk.http.internapcdn.net/imedia8uk/icrc/AV_360N_Nigeria_Widows_532.mp4   Aisha now lives in a house with two other families.  “Being a widow is very difficult – even to find a job.  My problem is schooling, sometimes shelter and feeding.” To help these widows, the International Committee of the Red Cross (ICRC) is working with the Borno State Widows Association to provide monthly food supplies to more than 1,300 widows.   There is also support to start a business with a 40,000 Naira (US$ 200) grant to buy materials. Widow Amina Lawan now has her own tailor shop after receiving this grant.  When she lost her husband three years ago, Amina rented a sewing machine and worked as a tailor but struggled to earn enough to look after her five children and send them to school.  “When I become a widow, we hardly ate two times a day,” she recalls. With the ICRC grant, she bought three sewing machines and now has her own tailoring centre.   She is also training two women to become skilled tailors.  “Now I can pay my children’s school fees and I feed them three times a day,” she states. Since the beginning of this micro-economic scheme, more than 2,500 widows have benefitted. The ICRC is calling for an additional 51 million CHF to continue delivering food, drinking water and health care to hundreds of thousands of people displaced by the conflict in northeast Nigeria, as well as neighbouring Cameroon, Niger and Chad. *APO/ICRC]]>