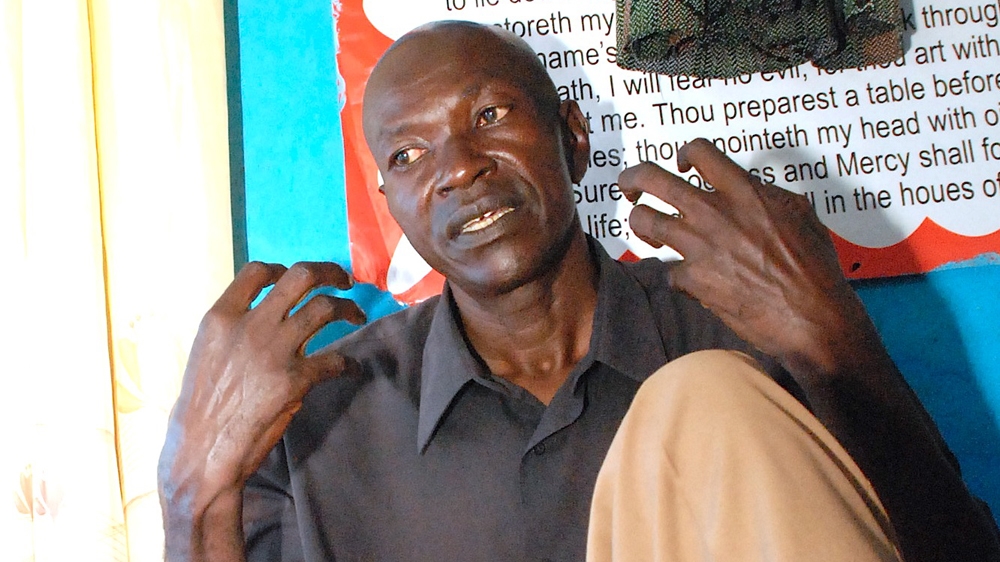 Effiong Elemi-Edu remembers that night in October 1995 well. It was cold when he left his home in a suburb of Lagos to buy suya for his wife. He had not got far when he heard gunshots and ran for cover.

When everything fell quiet, he emerged – determined to head straight home, his errand incomplete.

Then he heard the words that would change his life forever: “Stop there.”

“I stopped,” he remembers. “There were police officers, lots of them.”

They asked the then 25-year-old storekeeper where he was going and he told them. But instead of letting him go on his way, the officers pushed him into their vehicle and accused him of being an armed robber.

“I didn’t understand what they meant because I was not carrying any weapon on me, just the money I was going to use to buy suya,” he says.

“They took us – myself and one other guy – to SARS [Special Anti-Robbery Squad] at Ikeja, where they kept me under a tree,” Effiong explains. “Later, they came and took me to the ‘theatre’. There, there were two drums filled with sand. I was tied like a goat, two of my hands at my back; they crossed an iron rod at my back, and then hanged me.”

He remembers exactly how long he stayed hanging like that. “One hour, 20 minutes,” he says.

“They tried to force me to admit I was an armed robber – they even shot me in the leg,” he continues, revealing the scar on his left foot.

“I have never robbed anyone in my life. I was just a young man struggling to save money to get admission into a higher institution to further my education.”

He hoped to study mass communication or business administration. But that was not to be, for an influential politician from Nigeria’s oil rich Niger Delta, Alfred Rewane, had been murdered that morning – shot by unknown gunmen at his residence in Ikeja GRA, a few hundred metres from Effiong’s home.

Effiong was in the wrong place at the wrong time – and little beyond that seemed to matter to the authorities.

“They held me for days,” he says. “There was no phone at that time and there was no way for me to get in touch with my family.”

“It was my wife who learned about it. I think the people who saw me when I was taken away told her. [Then she] travelled home to inform my mother.”

The police had also picked up seven other men.

“They wanted me to copy a statement they had written to say that I am an armed robber and that‎ I conspired with the others in the murder [of Rewane]. I refused.”

“They beat me till my face was covered with blood which was pouring from my left ear.‎ I didn’t want to die, so I recopied the statement in my own handwriting. The statement is what they used in implicating us.”

“As I was recopying the statement, the only thing on my mind was that I didn’t do anything and that my God will let everyone know the truth. It was later that one of the‎ policemen came to tell us that he was sorry, that it was an order from above.‎”

“Later, they charged eight of us with the murder of the man. I don’t know the man, never heard of him. Those that I was charged with murder with, I had never seen any of them in my life.”

After being tortured and forced to admit guilt, seven of the men were arraigned before a high court, and sent to Kirikiri prison to await trial. But when the men arrived at the prison, prison officials insisted that the police take them to hospital to have their wounds treated. Instead, they took them to a police station – where four of the men subsequently died, reportedly due to the injuries sustained while being tortured by the police.

“The torture and suffering were too much,” Effiong reflects.

Rewane’s killing was later linked to the military junta of Nigeria’s then dictator, the late Sani Abacha. But Effiong and two other men – Elvis Irenuma and Lucky Igbinovia, who had both worked for Rewane – continued to languish in prison.

Then, after 15 years, more than 200 adjournments and the prosecution’s inability to produce any evidence linking the suspects to the crime‎, the trial judge discharged the case and acquitted the suspects, upholding a ‘no case submission’ made by the defence counsel.

“It appears to me that all the police did was to visit the venue of the incident and arrest the workers,” the judge declared in her judgement.

So it was that, 15 years after they were arrested, three of the seven arraigned men – Effiong Elemi-Edu, Lucky Igbinovia and Elvis Irenuma – walked out of prison.

But gone was the fit 25-year-old who was picked up that night. In his place was a balding 40-year-old man who walks with a limp – a constant reminder of the torture he endured.

“I spoke with Lucky recently, he’s in Switzerland now,” Effiong says. “I don’t know what he is doing there. We speak but not regularly. [And] I saw Elvis in June this year. I [am] supposed to call him, only I don’t have enough units in my phone.”

As for Effiong, things are not going according to plan.

“I’ve been facing a lot of challenges – accommodation-wise, money-wise,” he says. “I need to get my own place. Right now I’m squatting with my brother and his wife in a one-room apartment. That’s why I’m praying to God to help me get a place of my own.

“When we were over there [in prison] … at times these churches [would] … come over to visit. Immediately [when] you … come out and say you want to go to church and give a testimony, they will look at you and say ‘Where is this guy going?’ Once, somebody came out [and] they accommodated him. [But] … the guy packed everything away [stole from them]. So they [the churches] stopped helping other people.”

Early on in his imprisonment, his wife would visit him. But the visits stopped without warning, and when Effiong was released, he heard that she had remarried. He had no idea where to begin looking for her.

“My daughter is one year and four months now. I’m yet to set my eyes on [her]. Her name is Rose. They sent her picture to me. [But] I haven’t travelled home to Cross River since 2013 because financially I’m not okay‎. I’m so down. If I see money now, I will travel home today, today, today,” he says.

“I can’t tell you a lie, life has not been easy. What will I do? It’s only by the special grace of God that one is surviving and living. Things are really so tough in the sense that I just leave everything to God.”

“These days I watch football. Then listen to gospel songs. If I’m alone, I just go through my Bible.

“They wasted my time. They wasted the talent that God gave to me,” Effiong concludes, wistfully.

“At times it pains me, when I look at the way things are going. I know the level my friends are at now. Is it not my classmate in secondary school that is a commissioner in Cross River? The other one is working in Central Bank. The other one is a lawyer in Port Harcourt.

“But I don’t dwell on those things. If I do, one day I’ll just be struck down by a stroke. So I have to put all those things behind me [and] let the will of God be done.”

The post ‘I was sent to prison for a crime I didn’t commit’ appeared first on African Media Agency.