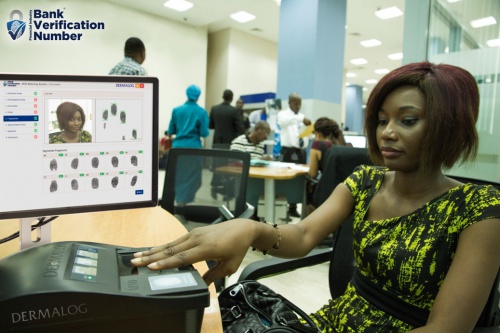 The biometric installation from DERMALOG has successfully registered over 18 million bank customers in Nigeria[/caption] The consulting company Frost & Sullivan has awarded Germany’s largest biometrics manufacturer DERMALOG  and its customized solutions and products for Africa with the “2015 African Biometrics Company of the Year Award”. DERMALOG is particularly successful with a large bank installation in Nigeria. In South Africa’s economic hub, the German biometrics manufacturer DERMALOG was honored with the “2015 African Biometrics Company of the Year Award”. The prize was awarded to the Hamburg-based company for its outstanding achievements in twenty African countries. DERMALOG has thus become the leading biometrics company in Africa. A key reason for the award is also the innovative portfolio of fingerprint scanners and biometric systems from DERMALOG. In countries such as Angola, Ghana, Tanzania, and Zambia, it contributes sustainably and decisively to solving local challenges such as identity theft, corruption, demography, and migration as well as the economic development of these countries. In Nigeria, DERMALOG currently cooperates with the Central Bank and 23 other banks in a major project in which all bank customers in the country are registered via DERMALOG biometrics. Customers receive a bank verification number with which all of their transactions can be completed securely and reliably via fingerprint. In 2013, DERMALOG won an international tender from the Nigerian Central Bank for the 50-million-dollar project. Meanwhile, the biometric installation from DERMALOG has successfully registered over 18 million customers in Nigeria. So far, approximately 10,000 double identities and multiple registrations have been averted every day, thereby preventing fraud and money laundering in the financial sector thanks to the reliability of the installation. The DERMALOG ABIS (Automated Biometric Identification System) has detected over one million individuals attempting to obtain double or multiple identities. Using DERMALOG fingerprint scanners and software, all participating banks can ensure that for all transactions, the identity reliably matches the customer because the customer must always be physically present for the registration. The Hamburg-based biometrics innovation leader is continuing to build on its success in the West African country. In the near future, registered bank customers will also be able to withdraw cash from ATMs and pay at cash machines using their fingerprints. DERMALOG Identification Systems, which is headquartered in Hamburg, Germany, is the largest German biometrics manufacturer and one of the world’s leading companies for biometric identification. Engineers and computer scientists are continually developing new and innovative products. The product portfolio ranges from biometric border control to biometric ID cards to new “FingerLogin” and “FingerPayment” solutions. In addition to Germany and Europe, the major markets of DERMALOG include Africa, Asia, Latin America, and the Middle East. In Germany, DERMALOG has supplied over 20,000 fingerprint scanners to registration offices and immigration authorities. Fingerprints are thus stored in new passports, ID cards, and residence permits. DERMALOG has meanwhile delivered an additional 150,000 fingerprint scanners to over 70 countries. Large ABIS (Automated Biometric Identification System) installations from DERMALOG have been delivered to more than 130 governmental customers worldwide. DERMALOG also provides solutions to banks and ATM manufacturers such as Wincor Nixdorf, which has provided worldwide more than 1,000 ATMs with fingerprint technology from DERMALOG, thereby replacing the less secure PIN. *APO]]>