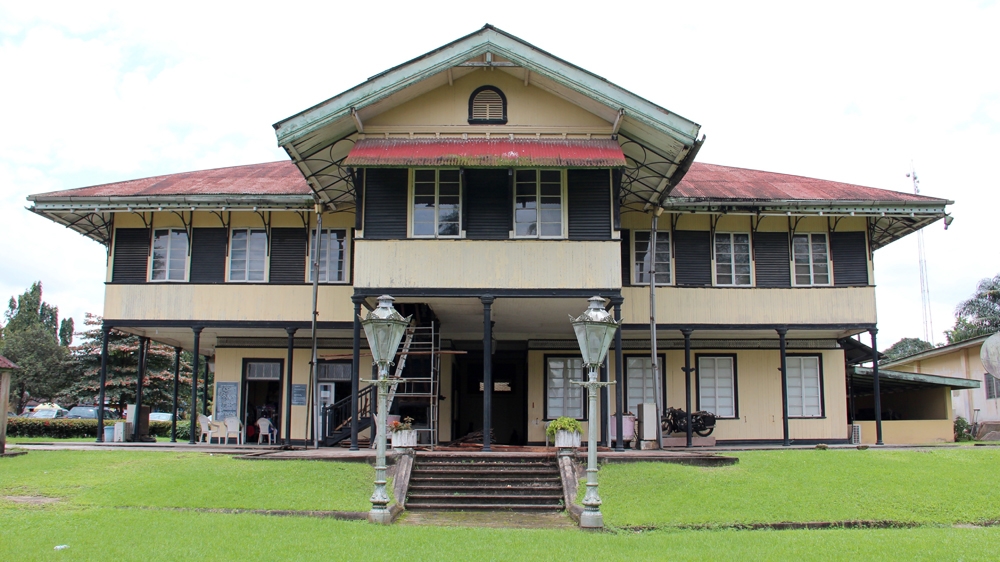 The view of the Calabar River from Government Hill is spectacular. It is easy to imagine that Consul Edward Hewett must have stood on the top floor of his house to watch the ships carrying palm oil as they left for Britain.

Hewett, a stern-faced man with a drooping moustache, was the first resident of what is now known as the Old Residency, a building prefabricated in Britain and then shipped to Calabar in 1884. The ground floor served as the headquarters of the expanding British Protectorate that would eventually become the southern part of the British colony Nigeria. With Nigeria’s independence in 1960, the colonial rulers left, but the Old Residency remained.

Its Scandinavian red-pine wood walls survived the Calabar climate (a 10-month rainy season), the Biafran War (when anything that could serve as firewood disappeared in Nigeria’s blockaded east), and dictatorial destructiveness (under the military rule of Ibrahim Babangida in the 1990s, a sister building some 100 metres away was torn down to make room for a concrete structure that, until now, serves as the presidential lodge).

For 100 naira (50 cents), visitors can stroll through the museum’s halls accompanied by a guide.

The exhibition opens with the darkest page in its history: the four centuries of Transatlantic slave trade during which the Portuguese, Spanish, Dutch, French, and British shipped millions of Africans across the Atlantic to sell as slaves. Calabar used to be Britain’s busiest trading post: almost one-third of the total number of Africans the British abducted from the end of the 17th century until the abolition of slavery in 1807 was shipped from here.

The trade in human beings

Thanks to Calabar’s natural deep harbour close to the Atlantic Ocean, the merchant ships, mostly from Bristol and Liverpool, could dock near the riverbank. When the ships sailed in, local merchants would send out canoes into the hinterland to raid for slaves.

In his book The Two Princes of Calabar, Randy J. Sparks recounts the fascination of some local traders – many of whom had taken on European names – with European goods. For example, in the mid-18th century Grandy King George of Old Calabar urinated in an English pewter pot and shaved with an English razor. To acquire coveted foreign goods like metal pots and razors as well as guns, Venetian beads and brass artefacts, these local traders sold people to the Europeans.

The copper rods in one of the museum’s showcases tell their own tale of the trade in human beings: 28 to 37 copper rods would pay for a female slave, 38 to 48 for a male.

“Sometimes people weep when they get to this part,” says heritage officer Ben Akan, who has worked at the National Museum in Calabar for 15 years. African-Americans, some of whom visit Calabar in order to trace the history of their forefathers, often find the visit especially emotional, he adds. Once in a while, somebody cries out of shame.

But not everybody likes to be confronted with the history of the slave trade, Akan explains. He quickly guides such visitors through to the second gallery of the museum’s ground floor.

This section covers the production of palm oil, and has on display steel oil drums, cast iron cooking pots, and the twined rope used for climbing palm trees. After the abolition of slavery, the orange-red oil became the most important export for Calabar. Not only could the oil be used as a cheap ingredient for soap, margarine and candles, it also served as a lubricant for the machinery of Britain’s industrial revolution.

This is where the tour ends for now. The staircase to the second floor is being restored, so that section of the museum is temporarily inaccessible. The museum plans to finish the building work before December, Calabar’s carnival season, when tourists pour into the small town close to the border with Cameroon. Until then, there is no way to enjoy the view from the top floor, nor to see the rooms where the British Consul would have supper, chilled by the punkah fan that a servant would operate from behind a screen.

The Old Residency itself, however, could tell stories the museum does not. Like how, about 10 years ago, when looking down the hill, you might see Charles Taylor swinging his racket on the governor’s tennis court while enjoying the asylum the Nigerian government had granted him – and how the former Liberian president disappeared again in 2006 after Nigeria announced an end to its hospitality. Taylor is now serving a 50-year sentence for war crimes in a UK prison.

The Old Residency also served as a prison. At the back of the wooden building rises a white stone annex that used to house the kitchen. It was in the cellar below this kitchen that Oba Ovonramwen of Benin was imprisoned in 1897.

He was the monarch of one of the last independent kingdoms in the region and was resisting annexation by the British. In 1897, a military invasion put an end to that independence. British soldiers burnt down the city of Benin, killing many of its inhabitants and looting its treasures; countless pieces of art – some of which can still be found in museums in Britain and elsewhere outside Nigeria. The string-headed Oba was eventually imprisoned in the cellar that now serves as the computer room of the museum.

According to oral history, when the Oba fell ill in his cell, a Calabar king pleaded with the British to allow the former ruler to stay with him in his palace to recover. The British acceded to this request, and Oba Ovonramwen remained in exile in Calabar until his death in 1914.

Ralph Moor, the British consul-general who had the Oba incarcerated in the cellar of his residency, died long before his royal prisoner. In 1909, after his return to England, Moor killed himself at the age of 49. ‘Suicide while temporarily insane’ was the verdict of the inquest at the time.

Moor’s wife testified that her husband had suffered insomnia caused by the recurring malaria fevers that had haunted him since his time in Nigeria, and the coroner’s jury concluded that this insomnia drove him to suicide. There was a reason why British officers in Nigeria in those days were advised to drink a glass of water with granulated quinine every day.

When the colonial rulers left, Calabar’s Old Residency was declared a national monument, but wasn’t turned into a national museum until 1986. The museum still uses the guestbook signed on the first page on opening day, August 19, 1986, by the military governor of Cross River State, the Nigerian state of which Calabar is now the capital.

The pale yellow walls of the Old Residency could do with a lick of paint, but as it is, Calabar’s national museum is struggling to get by. The funding from the federal government barely covers the most basic maintenance. Sometimes the state government chips in, for example, by donating a generator so that the museum’s visitors would no longer be left in the dark during power cuts.

Heritage officer Ben Akan wishes that Nigerian politicians would attach greater value to historical treasures like the Old Residency. He also would love to see more visitors coming to the museum. But in a country where history as a subject has gradually disappeared from the school curricula, he is not optimistic. “We are all products of a society that doesn’t value its history,” he sighs.

Sitting down in the library where the weight of the original paperwork from the British colonial era bends the bookshelves’ ledges, Akan philosophises on how, if he were minister of education, he would reintroduce history at all school levels and make museum visits obligatory.