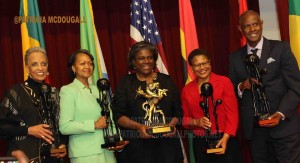 It was a full house at the Ghanaian Embassy in Washington, DC on September 14, when Assistant Secretary of State for African Affairs Linda Thomas Greenfield was honored by the ECOWAS Ambassadors Group for her stewardship as US top Diplomat for Africa. Assistant Secretary Greenfield deserves credit for the new dynamism in US-Africa relations said, Ambassador Dauda Diabate of Ivory Coast as he presented her with the first award of the evening. Harping on the deepening ties between US and Africa, Ambassador Greenfield cited last year’s USA –Africa’s leaders’ Summit, the visit of President Obama to Kenya and Ethiopia where he made a historic address at the African Union and the congressional renewal of the African Growth and Opportunities Act –AGOA, as signs of a positive trend. Honored alongside Ambassador Greenfield where other key political, administration and civil society actors working relentless to strengthened ties between Washington and Africa. Amongst them were Congress Woman Karen Bass, the ranking member of the House Sub Committee on Africa, Assistant U.S Trade Representative for Africa at the USTR Fiorizelle Liser, Dr Johnnetta Betsch Cole, Director of the Smithsonian National Museum of African Art, and Melvin Foote Founder and President of the Constituency for Africa. https://www.youtube.com/watch?t=1975&v=2lDw2MmXYi4   Presenting the awards were Ambassadors from various ECOWAS countries who took turns to highlight the great work done by the honorees to make Africa matter in Washington. 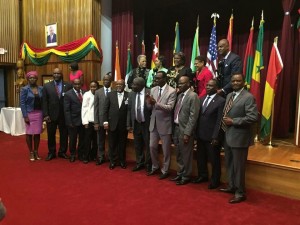 Echoing other speakers , Congress Woman Karen Bass considered by many as Africa’s voice on the Hill, more work was needed for the USA fully understand Africa the way it should. Bass who accompanied Obama on his recent African tour said the continent was moving forward and was full of opportunities. “African Americans are first responders of Africa in Washington, DC,” said Angelle Kwemo of Believe Africa, while introducing the event earlier. A minute of silence was observed for Ambassador Adefuye of Nigeria who passed away in August. The heavily attended event was spiced with West African music and food from Bukom Café.      ]]>