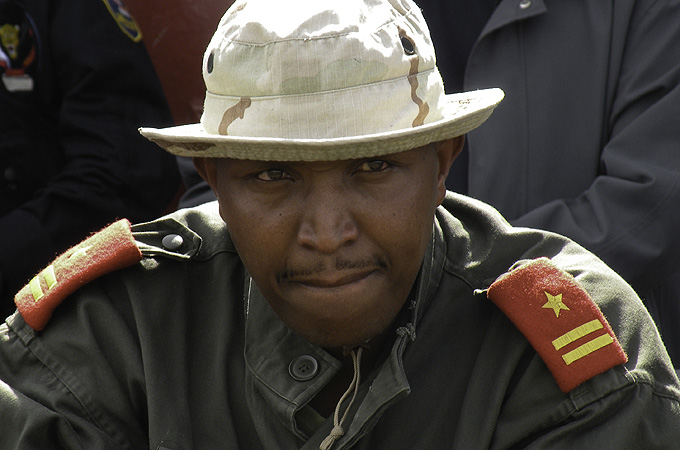 Former Congolese warlord Bosco “Terminator” Ntaganda is set to be tried before the International Criminal Court (ICC) for war crimes, including the rape of child soldiers within his own rebel force.

The former leader of rebels in the Democratic Republic of Congo, who turned himself in two years ago, will face 18 charges of war crimes and crimes against humanity at his highly-anticipated trial on Wednesday before The Hague-based court.

Prosecutors say Ntaganda played a central role in savage ethnic attacks on civilians in the mineral-rich and restive northeastern Congolese province of Ituri in 2002-2003, in a conflict rights groups believe has left some 60,000 dead since 1999.

Ntaganda “recruited hundreds of children… and used them to kill and to die in the fighting,” ICC chief prosecutor Fatou Bensouda said.

She brushed aside criticism that the court was targeting just one ethnic group for prosecution.

“This trial is about Bosco Ntaganda and how he took advantage of the ethnic tensions in Ituri to gain power and money,” she said.

Prosecutors have collected 8,000 pages of evidence and plan to call some 80 witnesses – 13 of them experts and the rest victims.

Three of the victims to take the stand will be former child soldiers in Ntaganda’s rebel Patriotic Forces for the Liberation of Congo (FPLC), their lawyers said.

Ntaganda’s lawyer Stephane Bourgon said his client would seek to prove his innocence before the ICC’s judges.

Ntaganda is “in good shape, he’s doing fine, he is looking forward to having a chance to present his case,” Bourgon told reporters.

The Rwandan-born Ntaganda, nicknamed “The Terminator” for his reputation as a brutal commander, is accused over his role in attacks on a number of Ituri towns over a year starting in September 2002.

One town that witnessed a massacre during that period was Kiwanja, where at least 150 people were killed in 24 hours.

Residents blamed Ntaganda for the violence and the scars still run deep in the eastern town.

“We are sure what happened here was under the control of Bosco Ntaganda and we want the law to take its course,” Jean Claude Bambaze, a human rights campaigner, told Al Jazeera.

Ntaganda, 41, was once one of the most-wanted fugitives in Africa’s Great Lakes region until he unexpectedly walked into the US embassy in the Rwandan capital Kigali in March 2013 and asked to be sent to The Hague.

Ntaganda joined government forces in 2009, was promoted to the rank of general and commander up to 50,000 soldiers, many of them former rebels who remained loyal to him.

He enjoyed a lavish lifestyle in Goma despite an international warrant for his arrest.

He defected in April 2012 and went into hiding, taking with him at least 600 heavily armed soldiers.

Many believe he was the leader of the M23 rebel group which briefly seized Goma in 2013. The group’s leadership has always denied the allegation.

Born in 1973, Ntaganda is among a dozen Africans who have been in the custody of the ICC, a court criticised for apparently only targeting leaders from the continent. His trial is set to be complex and last several months.