Nairobi — When Abby and his wife Kyalu were abducted by rebels in the Democratic Republic of Congo (DRC), he was forced into hard labour and she was raped. When they returned home, Abby sent his wife – pregnant with a rebel’s child – to live with her parents. “Finding out what they did to my wife was unbearable,” Abby said in a film ‘Living Peace: The Story of Abby and Kyalu’ which premiered at a conference in South Africa this week on sexual violence. “I became violent with everyone around me. The trauma I felt made me crazy,” Abby said. Most Congolese women who are raped by strangers are forced out of their homes, and children born of rape are also stigmatised, experts said. “They are called snakes because they remind people of bad times,” Benoit Ruratotoye, director of the Institute for Mental Health in the eastern Congolese city of Goma, told the Thomson Reuters Foundation by phone. The trauma of war seeps into the family home. Men who have been exposed to violence tend to become violent towards their wives and children. Six out 10 men reported being violent towards their partners, and one-quarter said they were sexually violent, according to a survey carried out in DRC’s North Kivu Province by the charity Promundo. Of those questioned, one in 10 men and two in 10 women said they had been raped. Most people had lost a family member in the war and said they never had enough money to sustain their family. In a country with few counsellors, psychiatrists or psychologists, those affected have to find a way to cure themselves, Ruratotoye said. In 2012, Promundo and Ruratotoye started carrying out male group therapy sessions in the east of the vast central African country, described by one senior United Nations official as the rape capital of the world. After a successful pilot with 300 men, they won additional funding to reach 9,000 men and their wives by 2019.

Community leaders help identify participants. “They receive complaints every day: ‘He is violent. He is beating his wife. He is an alcoholic’,” Ruratotoye said. A group of men sit down together, one afternoon each week for 15 weeks, and talk about the impact of war on their lives. “There is a real space for men to express their own suffering,” said Ruratotoye. “There is this feeling that ‘I am not alone.'” [caption id="attachment_20790" align="alignright" width="416"] 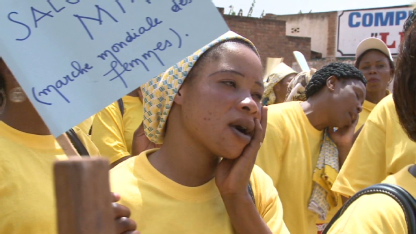 Congolese rape victims march against sexual violence[/caption] For Abby, the turning point came when another man talked about his wife being raped. “I felt he could understand the pain I was feeling,” he said. “I realised it was time for me to retake control of my life and take care of my family.” Men agree on rules for the sessions, such as respecting and listening to each other, which they must also apply at home. They give each other homework, such as washing clothes or bathing children, putting into practice what they have learned about gender equality. Abby started playing with and bathing the little boy who had been born out of rape. “When he started caring for my other son, I couldn’t believe it,” said Kyalu. “He changed, so I chose to forgive him.” At the end of the programme, there is a community celebration where the women testify about the changes they have seen in their husbands. Through this, Ruratotoye tries to spread the message of non-violence to others. “We want to be agents of change,” he said. The wave of sexual violence in the DRC dates back to conflicts in the mid-1990s. While militias still roam the east of the country raping men, women and children, increasing numbers of civilians are becoming perpetrators as violence has become normalised, experts say. *Allafrica/Thompson Reuters
]]>