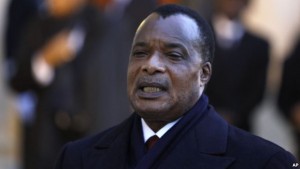 FILE – Republic of Congo President Denis Sassou Nguesso.[/caption] A Congo Brazzaville opposition leader said the people will take to the streets this Sunday to protest President Denis Sassou Nguesso’s decision to seek a third term. Guy Kinfoussia Romain, president of the Union for Democracy and Republic party, said Congolese will take a page from Burkina Faso, where civil society and labor unions played a key role in blunting former President Blaise Compaore’s bid to seek a third term and made sure that this month’s military coup did not succeed. The 72-year-old Sassou Nguesso has ruled oil-producing Congo Brazzaville for 31 years in two separate administrations. But he’s banned by the current constitution from seeking another term, and only candidates under the age of 71 can run. Referendum On Tuesday this week, Sassou Nguesso announced a referendum to change the constitution to allow him to run for a third term in the 2016 election. “We want to stop the president not to change the constitution. We want to stop him with our people. The people don’t like the president to remain in power; all the people. The people want the president to go in 2016,” Kinfoussia Romain said. Kinfoussia Romain said President Sassou Nguesso was elected through the constitution and if the constitution says he should leave, he must leave power. President wants another term Like President Paul Kagame of Rwanda, Sassou Nguesso has also argued that the people of Congo Brazzaville would like for him to seek another term to finish the good work he has been doing for the country. Responding recently to the situation in Burundi, State Department spokesman John Kirby said: “While the US respects the ability of any parliament to pass legislation that reflects the will of the people it is elected to represent, it does not support those in position of power changing constitutions solely for their political self-interest.  When a leader tries to change the rules in the middle of the game just to stay in office, it risks instability and strife – as we’ve seen in Burundi.” Like Rwanda’s President Kagame, Sassou Nguesso also launched a “national dialogue” which found that large majority of Congolese support removing age and term limits. Kinfoussia Romain said the Congo Brazzaville parliament is a rubber stamp parliament. “The parliament is not good because elections [in Congo Brazzaville] are not good. The parliament has been chosen by the president; the Constitutional Court is not good; president too is not good; all the things are not good,” he said. He said the people of Congo Brazzaville find themselves in the same situation as the people of Burkina Faso, and they will take to the streets Sunday. “We have to protest; we begin Sunday. We are preparing a big meeting next Sunday, all the opposition parties,” Kinfoussia Romain said. *Source VOA]]>