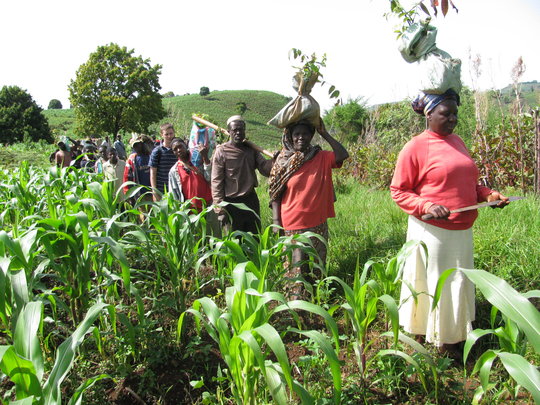 Cameroon and FAO today signed two agreements: one creating a $20 million, five-year Partnership Programme aimed at promoting agricultural development in the Central African nation, the other establishing an expanded Partnership and Liaison office here in the capital. The agreements were signed by Pierre Moukoko Mbonjo Cameroon’s Minister of External Relations, Essimi Menye, the country’s Minister for Agriculture and Rural Development, and FAO Director-General José Graziano da Silva, during a two-day official visit. The new FAO/ Cameroon Partnership Programme (FCPP) will focus on national priorities as set forth in the FAO Country Programming Framework for Cameroon. Priorities include implementing national strategies to boost rural growth, promoting agricultural jobs for youth and women, and developing and implementing policies and strategies to build the resilience of rural populations to disasters and crises. The Programme also foresees the possibility of support to South-South Cooperation activities in other African countries, funded by Cameroon. The new FAO office will be responsible for the Programme’s overall coordination. “As partners, the government and FAO will continue to keep each other informed about their respective policies and programmes on food security, nutrition, agricultural and rural development”, said Minister Moukoko Mbonjo. “This historic financial commitment highlights Cameroon’s strong commitment to food security and rural development. This generous contribution is an important recognition of Africa’s potential in the fight against extreme hunger and poverty,” FAO’s Director-General said. “It has become clear that while we have the power to end hunger in our lifetime, we will only succeed if we work together, including through Southern countries assisting one another,” he added. “Cameroon is committed to strengthening agriculture in-country and beyond, which is the sector at the basis of Africa’s development”, added Minister Menye. “We are delighted to increase the already long existing cooperation with FAO. It will strengthen our ongoing work and open new opportunities to work together in pursuit of our common goals,” he said. Cameroon has been member of FAO since 1960 and the Organization has maintained an Office in Yaoundé since 1978. From Millennium Development Goals to Sustainable Development Goals Cameroon has already achieved both the MDG target of halving the proportion of the population suffering from undernourishment by 2015, and the more stringent World Food Summit target of 1996 of halving the absolute numbers of the hungry by 2015. Moving forward, a key focus of the new partnership established here today will be joint efforts to work towards achieving new hunger targets outlined under the post-2015 development agenda to be established later this year. FAO has commended the efforts of the Government of Cameroon and recently awarded the country for its fight against hunger and malnutrition at a ceremony at its Rome headquarters. *FAO/APO]]>