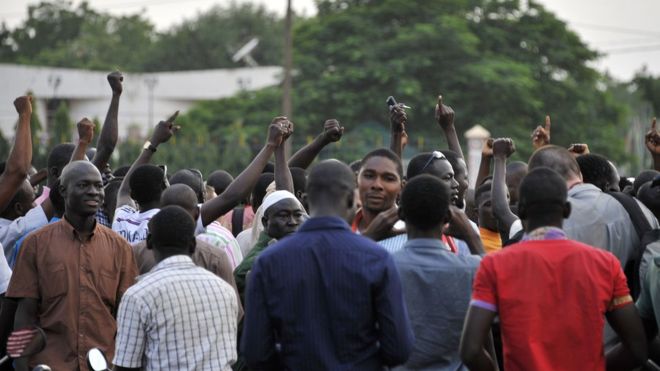 President Michel Kafando and Prime Minister Isaac Zida were detained at the presidential palace in the capital, Ouagadougou. It comes two days after a commission recommended the disbanding of the presidential guard (RSP). Shots have been fired near the palace to disperse protesters and there is an air of panic, say reports. There was no word on any casualties. Violent mass protests that included setting parliament on fire forced long-serving Mr Compaore out of office in October 2014. Mr Kafando and Lt Col Zida had been tasked with organising fresh presidential elections next month. They and other officials were “taken hostage” by the RSP, the head of the transitional parliament said in a statement.

Moumina Cheriff Sy said military chiefs were trying to negotiate the officials’ release. “The RSP’s countless disruptions are a serious attack on the republic and its institutions,” Mr Sy said. “I call on all patriots to gather to defend the motherland,” he added. [caption id="attachment_20690" align="alignright" width="624"] 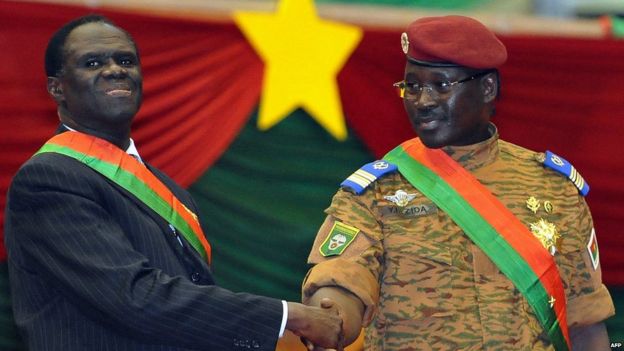 Mr Kafando (L) and Prime Minister Lt Col Isaac Zida (R) took power 10 months ago[/caption] Tensions have been building ahead of the poll scheduled for 11 October. Members of Mr Compaore’s party have been declared ineligible. Those who supported the ex-president’s bid to amend the constitution so he could seek another term are also banned from running. There has been prolonged friction between the 1,300-strong RSP and Lt Col Zida, a former second-in-command of the group. Then on Monday, a truth and reconciliation commission released a report calling for the disbanding of the unit amid accusations that it opened fire on unarmed protesters during last year’s protests. *Source BBC]]>