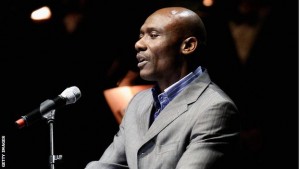 Former international goalkeeper Joseph-Antoine Bell has failed in his bid to be the next president of the Cameroon Football Federation (Fecafoot).

One of Africa’s best ever goalkeepers failed to send in the correct documents when making his application.

Instead Atah Robert Behazah or Tombi A Roko Sidiki will be the next president.

The Fecafoot elections must be held by Monday if the four-time African champions are to avoid a ban from world governing body Fifa.

Behazah is a former coach while Sidiki is a onetime general secretary of the federation.

Bell, who has been very outspoken about problems within the Cameroonian game, was a surprise candidate for the post.

He told BBC Sport he believed he did not need to send documents given he had already filed them in February, ahead of elections that were then cancelled.

The applications of four other candidates were also rejected.

The local game has been run by a Normalisation Committee, appointed by both Fifa and the Confederation of African Football, since July 2013.

This came a month after Fecafoot cancelled the re-election of Iya Mohammed as president, since he was in jail awaiting trial at the time.

Earlier this month, Mohammed was sentenced to 15 years in jail after being found guilty of mismanagement at the state-owned cotton company, Sodecoton, by Cameroon’s Special Criminal Court.

The Normalisation Committee was tasked with organising new elections as well as revising Fecafoot’s statutes, neither of which – over two years later – have happened.

Created to act as an electoral body, the Normalisation Committee’s original deadline of March 2014 for new elections has been pushed back three times for varying reasons.

Fifa recently gave Cameroon an ultimatum that if the Normalisation Committee fails to produce an elected executive Cameroon would be suspended.

EU to use warships to curb human traffickers

Coronavirus – Africa: Joint Statement on the Role of a Sustainable Ocean Economy in a post-COVID-19 World