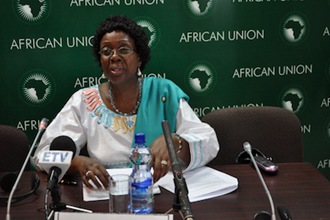 Tumusiime Rhoda[/caption] Within the framework of partnership meeting for implementing the African Water Vision 2025, the African Union Commission (AUC), through its Department of Rural Economy and Agriculture (DREA), signed Memoranda of Understanding (MoU) with CLTS-Foundation, Water Aid, Water and Sanitation for Africa (WSA), Sustainable Sanitation Design (Susan Design), and Norges Vel. It was took place on 21 September 2015 at the AU Headquarters in Addis Ababa, Ethiopia. The AUC and the partner organizations signed the MoU on different areas of collaboration to facilitate the realization of the Africa Water Vision 2025 through revitalizing efforts to create an enabling environment for international cooperation to achieve the 2025 vision. H.E Mrs. Tumusiime Rhoda Peace, Commissioner for the Department of Rural Economy and Agriculture, AUC stated that strategic ways of sanitation management is on top of the African leadership agenda. While emphasizing the sound implementation of the MoU signing, Mr. Bai-Mass Tall representing the  President of the African Ministers’ Council on Water (AMCOW), also said that water and sanitation issue should be priority equally to other matters around the continent. The meeting discussed issues related to the AU Water and Sanitation Initiatives that were presented by the Commission and which include: (i)- the Kigali Action Plan (KAP) that is in progress and already championed by the Government of Rwanda; (ii)- the  Operation 2M4M as scaling up of the KAP to all AU member States, that will allow massive interventions for access to water supply facilities  to 110 million Africans, and sanitation facilities to 220 million Africans; (iii)- the African Clean Village Programme for large sanitation communities led total sanitation to 250 million Africans mostly in rural areas in Africa; and (iv)- the Pan African Productive Sanitation Programme that aims at developing mechanism for private sector involvement for large scale interventions for reusing waste in agriculture and energy in order to contribute to better solve problem faced by: energy, water resource management, infrastructure, industry, climate, and air pollution sectors. The meeting was attended by AUC Commissioner for Rural Economy and Agriculture; AMCOW President; development partners; diplomatic corps; and AUC staffs. While the importance of this kind of partnership has been stressed by the Representative of the African Development Bank (AfDB) to successfully approach the holistic problems of water and sanitation in Africa, call was made to development partners to give equal attention and strengthen support to development issues including water supply and sanitation on the continent. For H.E Mrs. Tumusiime Rhoda Peace, Commissioner for the Department of Rural Economy and Agriculture, the pursuit of the Africa Water Vision 2025 is not an option especially given the need to unleash Africa’s development. *APO/AUC]]>