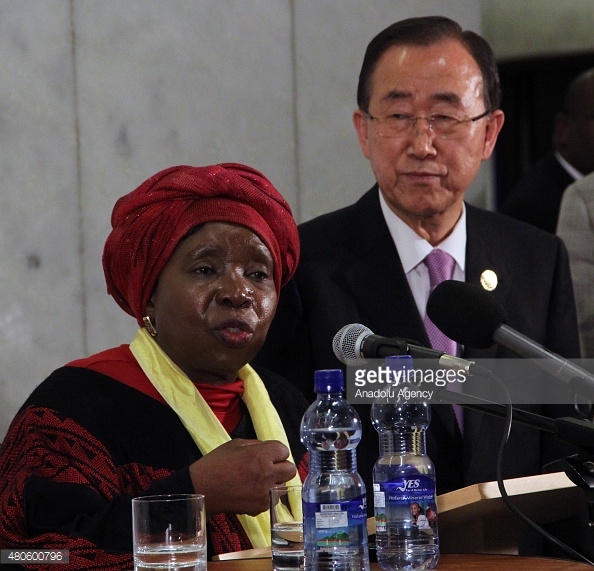 UN Secretary General Ban Ki-moon (R) and Nkosazana Dlamini-Zuma (L), head of the African Union Commission[/caption] World leaders have voiced overwhelming support and committed to promoting gender equality and women’s empowerment aimed at achieving the 2030 Sustainable Development Goals. The African Union Commission Chairperson, Dr. Nkosazana Dlamini Zuma, joined global leaders and delegates to make commitments at a meeting co-organised by UN-Women and the People’s Republic of China in the margins of the 70th Session of the UN General Assembly meeting in New York. In her remarks, the AU Commission Chairperson said the AU places a central focus on achieving gender parity and women’s empowerment in its Agenda 2063. She pointed out that in Africa, the year 2015 is the year of women’s empowerment and development toward Agenda 2063. She noted that during the last Summit of Heads of State and of  Government, a Gender Scorecard was developed to track progress made in achieving gender equality. Dr. Dlamini Zuma committed to refining this tool in the future by including more indicators. The Chairperson noted that while Rwanda is leading the world with the highest number of women represented in Parliament, 22 countries have at least 30% of women in Parliament, while 14 countries have 30% of women ministers, with Cape Verde leading Africa with the highest representation of women ministers. During the gathering, Chinese President Xi Jinping, among others, announced a donation of $10million USD to UN-Women to finance development and training projects aimed at promoting gender parity and women’s empowerment. While leaders announced various contributions and donations, some of the world leaders expressed political will and determination in advancing the course for women’s empowerment and gender parity. President Uhuru Kenyatta of Kenya said progress for women is progress for us all, and the whole world stood to gain from gender equality. Holding 20 years after the Beijing declaration and platform for action to promote gender equality and women’s empowerment, the meeting was attended by UN Member States, Non-Governmental Organisations, the private sector and partners. *APO]]>