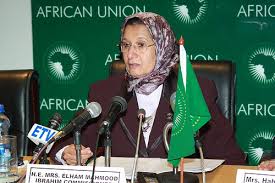 Dr. Elham Ibrahim[/caption] The AU Commissioner for Infrastructure and Energy, Dr. Elham M.A. Ibrahim, has been awarded the “2015 Outstanding Woman of the Year in the Power Sector” at the East African Power Industry Awards on 27th August 2015. The Award was presented to the Commissioner during the Industry Awards Gala Ceremony, held at the InterContinental Hotel, in Nairobi, Kenya. The Event was held during the 17th East African Power Industry Convention (EAPIC). The Organisers noted with gratitude the continued leadership and passion shown by the Commissioner in initiating and promoting various energy access initiatives in East Africa including the Geothermal Risk Mitigation Facility (GRMF) and the Programme for Infrastructure Development in Africa (PIDA). Receiving the Award, Dr. Elham Ibrahim said,”It is great honour and pleasure for me to receive this very valuable award which indicates the recognition of the work done and the role played by the AU Commission for the development of the African Energy Sector”. Dr. Elham Ibrahim also called for Member States, development partners, financial institutions, the private sector and civil societies from all parts of the world to join the AU Commission in delivering its vision for ensuring sustainable and modern energy access for all Africans. She also recognised the EAPIC’s role in mobilising both the private and public sectors in proffering sustainable and innovative solutions to the energy access challenges in East Africa. “The convention’s sessions and Exhibition show the real and excellent and innovative work going on by SMEs together with the utilities to address the energy challenges in the continent”, she noted. Previously, Dr. Elham Ibrahim also received the 2015 African Aviation Award for “Outstanding Services to African Aviation Development”. The AU Commissioner was presented with the Award during the African Aviation Awards Ceremony & Gala Dinner, which was held at the AU Headquarters in Addis Ababa, Ethiopia on 17th March 2015. *AUC/APO]]>