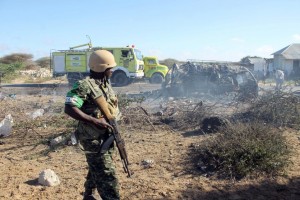 An African Union Mission in Somalia (AMISOM) soldier stands guard close to destroyed vehicles following a suicide attack which targeted a convoy of African Union troops on September 8, 2014 (AFP Photo/Abdulfita Hashi Nor)[/caption] Nairobi (AFP) – At least 50 African Union soldiers are believed to have been killed and another 50 are missing after Shebab militants overran a military camp in southern Somalia on Tuesday, according to Western military officials.

The attack on the camp in Janale, 80 kilometres (50 miles) southwest of Mogadishu in the Lower Shabelle region and manned by Ugandan troops, now ranks as one of the deadliest yet against AMISOM troops.

“It is assessed that at least 50 AMISOM troops died,” said a briefing note sent to diplomats by Western military officials and seen by AFP. It said that in total around 100 soldiers were “unaccounted for” after the attack.

Somalia’s Al-Qaeda affiliate, which has recently lost a string of key bases in the face of an AMISOM offensive, said the attack was revenge for the killing of seven civilians by Ugandan troops at a wedding in the town of Merka in July.

The number feared dead matches that claimed by a Shebab spokesman, although the AU force — which numbers over 22,000 and also includes troops from Ethiopia, Kenya, Burundi and Djibouti — has said it has not yet counted the dead.

“Given the complex nature of the attack, AMISOM is currently verifying the number of casualties and extent of the damage,” said a statement issued late Tuesday, more than 12 hours after the assault.

Western military sources said the attack began with the destruction of two bridges, cutting the camp off. A suicide car bomber rammed the base followed by an estimated 200 Shebab fighters who overran the camp.

AMISOM said its troops “undertook a tactical withdrawal” as the attack began, and the briefing note said the soldiers did not have any air support.

It also said Kenyan and Ethiopian jets as well as US drones “were unavailable at the time of the attack” while AMISOM tanks and artillery located in Janale had been redeployed elsewhere.

The report highlights the challenge that AMISOM faces in holding territory seized from the Islamists, who frequently melt away into the bush in the face of conventional offensives and subsequently strike back with guerrilla assaults — where their objective is only to inflict casualties.

Witnesses said the Shebab took over the camp, looting weapons stores and loading corpses onto trucks. 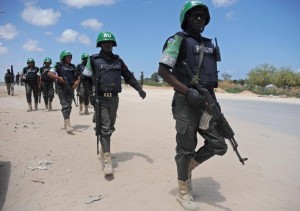 AMISOM has said the camp was manned by soldiers from Uganda, and the number feared dead matches that claimed by a Shebab spokesman (AFP Photo/Mohamed Abdiwahab)[/caption]

The group has previously gathered the bodies of dead soldiers for use in propaganda videos.

The Shebab is fighting to overthrow the internationally-backed government in Mogadishu, which is protected by AMISOM.

In June, Shebab fighters killed dozens of Burundian soldiers when they overran an AMISOM outpost northwest of Mogadishu. The militants also stage frequent suicide attacks inside the capital.

But the AMISOM force has also made significant gains against the Shebab, pushing them out of several strongholds in the southwest of the country.