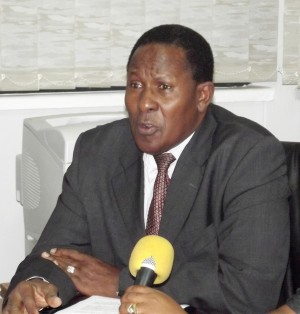 Dr. Salif Sada Sall, Head of African Union South African Regional Office[/caption] The African Union Commission (AUC) through its Democracy and Electoral Assistance Unit (DEAU) has commenced a five-day Capacity Building Training program on Election Dispute Resolution for Electoral Commissioners and Political Party leaders in Malawi, using the BRIDGE (Building Resources for Democracy, Governance and Elections) Curriculum. The training, which started on Monday, 7 September 2015, in Blantyre, Republic of Malawi, forms part of the AUC’s program of follow-up on recommendations of the African Union election observation missions, and is aimed at helping Member States implement recommendations through capacity building and electoral reforms. The objective of the training is to enhance the capacity of political stakeholders in Malawi to peacefully resolve election-related conflicts before, during and after elections. Some of the topics to be covered during the 5-day training are: concepts of electoral dispute resolution/electoral justice; international human rights instruments and electoral rights; prevention of electoral disputes; the legal framework as a tool for prevention of electoral disputes; alternative dispute resolutions mechanisms; supporting stakeholders in elections dispute resolution; fairness and accessibility and elections dispute resolution action plan, among others. In his opening remarks, Dr. Salif Sada Sall, Head of African Union South African Regional Office (AU-SARO), expressed the AUC’s commitment to supporting the Malawi Electoral Commission and political stakeholders in Malawi to enhance their capacities in anticipation of the Tripartite Elections in 2019. Commenting on the module of the course, “Election Dispute Resolution”, Dr. Sall noted that “conflicts are often inevitable, especially during elections, and it is, therefore, important for electoral stakeholders such as parties and electoral management bodies to have the necessary skills to resolve it when it occurs”. He, therefore, urged participants to seize the opportunity offered by the training to learn new approaches to election dispute resolution to enable them resolve conflicts peacefully whenever they occur. Also present in the opening of the training was the Chairperson of the Malawi Electoral Commission, Justice Maxon Mbendera. He expressed the Electoral Commission’s profound appreciation to the AUC and recalled that the training on “Election Dispute Resolution” is the third of its kind provided by the AUC since the 2014 elections. He noted that the support being provided would enable the Malawi Electoral Commission to be well prepared for the next General Elections in 2019. *AUC/APO  ]]>