Just like the missionaries who carried Christianity to Africa’s most populous nation a century ago, millions of Nigeria’s diaspora are doing the exact same – in reverse – with a full-bodied pentecostal version of the faith. By Ryan Lenora Brown*

The roads that wind north from Lagos, Nigeria, toward the headquarters of the Winners’ Chapel mega-church are lined with unusual testaments to Nigerians’ religious fervor. 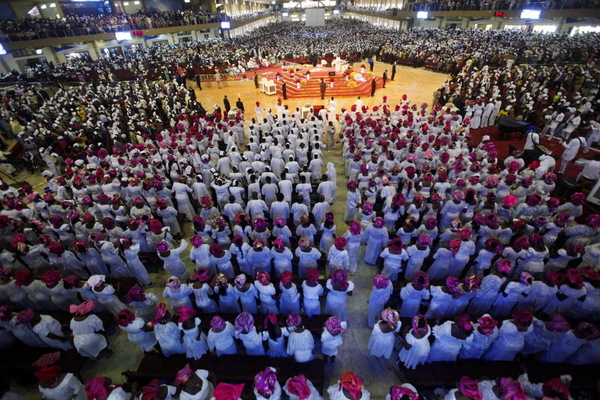 Worshippers, dressed in traditional attire, attend a church service at the Living Faith Church, also known as the Winners’ Chapel, in Ota district, Ogun state, some 60 km (37 miles) outside Nigeria’s commercial capital Lagos September 28, 2014. Hundreds of millions of dollars change hands each year in Nigeria’s popular Pentecostal “megachurches”, which are modeled on their counterparts in the United States. Some of these churches can hold more than 200,000 worshippers and, with their attendant business empires, they constitute a significant section of the economy, employing tens of thousands of people and raking in tourist dollars, as well as exporting Christianity globally.Akintunde Akinleye/Reuters[/caption] There’s the Amazing Grace Hair Salon and the No King But God Driving School, My God Is Able Furniture Makers and God’s Grace Multipurpose Hall. And wedged between these omnipotently styled businesses are the churches themselves, hundreds of them, carrying on tenaciously in a sweltering tin shack or a room balanced atop a gas station, in the parking lot of a half-finished shopping mall or perched on stilts above Lagos’s thick, viscous lagoon.

But even in a country so devout, Canaanland stands out. The headquarters of one of the most powerful churches in Africa rambles out across 10,500 acres and includes not only a massive church – the 50,000 seat Faith Tabernacle – but a fully stocked company town complete with schools and a university, a bottled water processing plant, restaurants, shops, and residential neighborhoods. Every weekend, hundreds of bus loads of Nigerians, regally coiffed in vividly patterned, tailor-made suits and dresses, pour through its gates for Sunday service.

“The next two months will be the greatest two months of your life to date,” promises David Oyedepo, the church’s leader, to the crowd at Faith Tabernacle on a recent Sunday morning. His voice booms through the packed chapel and out to an overflow area where thousands of additional worshipers sit fanning themselves on plastic chairs, attentively listening to his message of prosperity. “Your struggle has finally come to an end!”

Over the past century, no region on earth has witnessed so dramatic a transformation in its religious life as Africa. In 1910, just 9 percent of the continent’s population was Christian – today, nearly half of its 1.1 billion people are. Much of that growth can be attributed to European and American missionaries, who fanned out across the continent over the course of the 20th century with a promise to bring light to the “dark continent.”

But today, the arc of that story is beginning to move in reverse, with Africa and other regions of the so-called global south not only receiving missionaries, but increasingly leading international evangelical efforts of their own. Today, nine of the top 20 missionary-sending countries in the world are in Asia, Africa, and Latin America, according to the Center for the Study of Global Christianity.

They are not only fervently faithful, but also intensely mobile, with some 1.2 million Nigerians currently living abroad, according to the United Nations (although some put the figure as high as 17 million). Over the past three decades, Nigerian Pentecostal mega-churches have sprung up from the shantytowns of Sierra Leone to the strip malls of Colorado Springs, Colo.

Britain’s fastest growing church is the Nigerian Redeemed Christian Church of God, and four of that country’s 10 largest churches were founded by Nigerians. In Kiev, Ukraine, a city awash in onion-domed Orthodox cathedrals, the largest Sunday service – with about 5,000 people attending – is conducted by Sunday Adelaja, a Nigerian and founder of the Pentecostal Embassy of God church.

“Traditionally churches came from the Western world, but now we are returning the kingdom back to them,” says Tope Olukole, a spokesman for Winners’ Chapel, which is also known as the Living Faith Church Worldwide. “With science, with modernization, the West has lost its debt to Christ, but in Africa the faith is still strong.”

Although Nigerians have left an imprint on most of the world’s major Christian denominations – one-quarter of the globe’s Anglicans live here, for instance – their most exported version of the faith is undoubtedly Pentecostal.

That’s exactly the kind of Christianity that Winners’ Chapel is steeped in. It’s a full-body celebration of God that regularly includes weeping and whooping, speaking in tongues, and calling demons out from the bodies of the sick.

With no central authority and a sharp focus on personal, emotional, and spiritual connection, Pentecostalism indeed seems ideally suited to a country like Nigeria, a place steeped in an entrepreneurial attitude born of decades of unreliable government. Nigerian Pentecostalism has become a torchbearer for a popular message: Join the church, and you will prosper – not just spiritually, but financially, too. For the millions who flock to these churches worldwide – Nigerian or otherwise, and many of them looking for a fresh start – this is a welcome message. “By the first of next year, you’ll have double what you have now,” Mr. Oyedepo tells his Canaanland audience. “Double your health, double your present impact, double your fortune.”

Strong faith and hopes for prosperity no doubt account for much of Nigerians’ compunction to spread the Gospel. But this is also a story that owes a great debt to the seismic social and economic changes that have seized this country – and the African continent – over the past half century. Among the most important pieces of the puzzle is the growth of cities. On the eve of Nigeria gaining its independence from Britain in 1960, Lagos, the largest city, had a population of just over a quarter million people. Today, 20 million people live there, with 6,000 new migrants arriving every day. Nearly all of them come in search of one thing – work – and most have few social ties in the unforgiving jumble of a city. That’s where churches come in, says Maria Frahm-Arp, a lecturer at the University of Johannesburg in South Africa who studies Pentecostal churches in Africa. Churches, she points out, provide more than spiritual fulfillment to new migrants. They are also sources of community, and in countries like Nigeria are often a far more reliable safety net than government-provided social services.

“Mega-churches often offer a great deal of social teachings – how to make it in the world – that are practically valuable to migrants,” she says. “And beyond that people are often using church networks to access jobs and build social ties in new places.”

But if churches seem to spring up like dandelions in the cities of Lagos, Ibadan, and Abuja, the country’s evangelists are also looking further afield. Winners’ Chapel, for instance, claims membership on five continents, and the Redeemed Christian Church of God (RCCG) – Nigeria’s largest Pentecostal church – has adherents in more than 100 countries and says its goal is to build a church within a five-minute walk or drive of every person on earth.

It may be a startlingly ambitious prospect, but there’s a good reason the church can even entertain it: Nigerians move. A lot. Driven by decades of political turmoil and economic instability in their home country, nearly a quarter-million Nigerians now live in each of three countries – Britain, the United States, and South Africa – and other, smaller Nigerian communities are scattered around the globe.

“One of the most unrealized aspects of church history, in my opinion, is the importance of immigration in transporting the faith from one place to another,” says Warren Bird, a scholar of global mega-churches. “Many of the churches that now seem to be a mainstream part of life in America were brought here by migrants from around Europe – and that’s the same thing you’re beginning to see with Nigerians as they emigrate around the world.”

That migration of people is highly visible in cities like Johannesburg, where a stadium service led by RCCG’s leader, Enoch Adeboye, can draw thousands of worshipers, including high-profile figures such as the country’s chief justice, Mogoeng Mogoeng, who recently danced on stage at one such event. (Mr. Adeboye once described RCCG pithily: “Made in heaven, assembled in Nigeria, exported to the world.”)

Every weekend, Nigerian churches housed in industrial parks, storefronts, and primary schools draw flocks of worshipers – South Africans, Nigerians, and foreigners alike – in a seeming morning-long reprieve from South Africa’s rampant xenophobia. But the reach of Nigerian churches goes far wider, stretching into corners of the world where the West African presence is far less obvious. Look quickly, for instance, and you might miss RCCG’s Living Faith Sanctuary (no relationship to Winners’ Chapel), wedged between a bargain housewares shop and a marijuana dispensary in a bland Colorado Springs strip mall. But inside on an icy Sunday last December, about 70 worshipers gathered for a sermon by Pastor Michael Lipede, whose trilling “R’s” and singsong consonants betray a national origin shared by more than half of his congregants.

“You can’t separate faith from culture, so in a way churches are always going to be cultural centers,” says Charles, a Nigerian engineer who recently moved to Colorado. He was raised Roman Catholic, but converted to Pentecostalism in college. When he arrived in the US, one of the first things he did was find a Nigerian church – RCCG – in his new hometown of Raleigh, N.C.

“The church helps people stay close to Nigeria,” says Mr. Olukole, the spokesman for Winners’ Chapel in Lagos. “If you worshiped at Winners’ in Nigeria then, of course, that is your first port of call when you go abroad.”

But these churches are also making inroads into local communities as well. At Living Faith Sanctuary, about a quarter of the worshipers are locals, and Charles, who gave only his first name, says that “almost everyone” who visits the church’s small food pantry for handouts is “a white person from here.”

“The church has an obligation to be an open house of worship above all else,” Charles says, noting that in a highly religious city like Colorado Springs, potential congregants are not difficult to find. Still the biggest audience for Nigerian churches abroad remains Nigerian migrants, attracted to a gospel of prosperity and self-realization, and it is unlikely they’ll stop coming anytime soon.

Within Nigeria, the faithful remain ever fervent. As cars pour out of Canaanland’s gates, many of them bear a church bumper sticker that reads “I’m a winner!” Next to the words is a miniature rendition of the Winners’ Chapel logo: a map of the world catching fire.