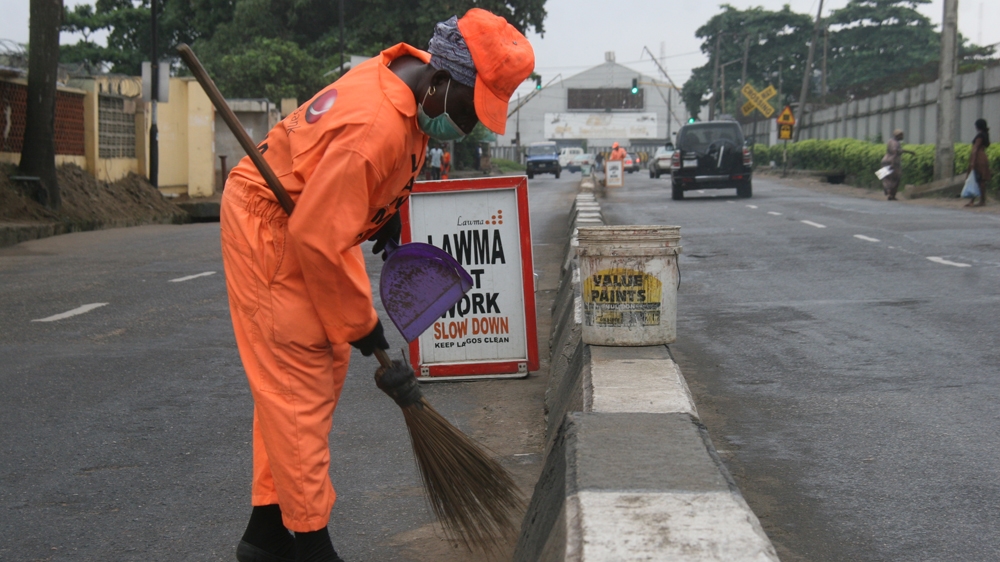 It is drizzling as we approach the team of orange jumpsuit-clad street sweepers busily removing the damp sand from Lagos’ bustling Opebi Link Road. One of them looks up for just long enough to point out Kafayat Badru, a sweeper a little further down the road.

Crouched over to scoop up sand, she seems oblivious to the speeding traffic and our approach. When she notices us, she stands tall, but holds on to her broomstick as though life itself emanates from it.

“I’m strong,” she says, by way of introduction. But her grimace suggests otherwise.

In fact, the 40-year-old street sweeper has malaria.

Such declarations of wellbeing in the face of adversity aren’t uncommon in Nigeria, particularly among Evangelical Christians. It’s an expression of faith inspired by a Bible passage: “Let the weak say, I’m strong” (Joel 3:10). But Kafayat isn’t a Christian. She is a Muslim who punctuates many of her statements with ‘Alhamdulillah’, the Arabic for ‘all thanks are due to Allah’.

This isn’t an aberration. In the south of the country, it is usual for Christians and Muslims to borrow from one another’s faiths and to share in one another’s celebrations and religious services.

She is feverish, but neither the rain nor the malaria are sufficient excuse to stay away from work. So, this morning, she reported for work at 6am with her dustpan, broom and bucket, just as she does six days a week. The alternative is too grim for this mother of four to contemplate.

When she first became a street sweeper, Kafayat says people would taunt and make fun of her for doing such a “dirty and lowly paid job”. But for her, the choice was between street sweeping and hunger.

She speaks softly and avoids making eye contact as she explains: “I was shy and was worried about how people would view me.”

“In fact some of my friends were angry that I decided to take up this kind of job. But I told them since they cannot meet my needs, and are unable to get me a better job, I have to do this ….”

“My husband has three wives but his business isn’t doing well lately,” she continues as she sweeps sand into the open gutter. “So I’m left to cater for my children from what I earn here and from my small store at home.”

But the work is physically crushing. Bending over for hours at a time as they sweep thick layers of sand and dust off the asphalt with a straw broom leaves many of the sweepers with debilitating aches and pains.

“It is not an easy job,” Kafayat admits.

“Most times my body aches, but I am not fazed by that because this is the only employment I have and I have responsibilities to meet, like to take care of my children.”

She scoops two mounds of sand into her bucket. “So I have to come here and work despite the challenges.”

But the pains in her muscles and joints, which heavy doses of pain killers have done little to suppress, are not the only side effect of this work. She says she constantly suffers from respiratory problems and eye infections as a result of the constant exposure to dust. Her face mask, rubber shoes and long, thick socks provide only minimal protection.

“As you can see I’m wearing a long sock and plastic shoes to protect my feet and legs,” she explains. “But dust still gets into my toenails and sometimes causes whitlow. Dust also gets into our eyes. We are not issued protective glasses.”

By about 11:30am, Kafayat has finished sweeping her section of the road. She removes a bottle of energy drink from the bag she keeps by the gutter and quickly consumes half of its contents. Then she washes her arms, legs and face at a nearby tap, before taking a plastic bowl to a food seller a further down the road. It is noon, and she is just about to have breakfast.

But her work is not done for the day. Kafayat’s shift ends at 1:30pm, and she must wait by the side of the road until another street sweeper arrives to take over from her.

In fact, scores of street sweepers recently protested in front of the state’s parliament over the failure of the Lagos State Waste Management Authority (LAWMA) to pay their salaries for five months.

And, despite the risks to their health as a result of their work and the danger inherent in working so close to fast-moving vehicles, the sweepers receive neither health nor life insurance. According to LAWMA, between 2007 and 2010, 57 street sweepers were killed in car accidents while carrying out their work. Several others have been maimed for life.

Kafayat says she trusts in God to protect her from such a fate. But she does worry about what would happen to her children if she was severely injured or killed in an accident.

It is the end of the morning shift now and the sweepers have gathered inside a makeshift kiosk to say a short prayer together. It is a brief opportunity to talk and laugh among themselves, and special prayers are recited and songs sung for a colleague who is celebrating her 50th birthday.

But rain clouds are gathering overhead and it’s clear that another downpour is on its way. Kafayat and the other street sweepers would prefer not to get caught in it.

She makes her way to the bus stop to catch a tricycle taxi, popularly known as a keke napep, but the rain is already falling heavily.

Olorunshogo, where Kafayat lives, is a cluster of dirty old brick houses on the outskirts of Oshodi. A cacophony of noise greats you there – pirated DVDS blaring from the speakers of their sellers, the clatter of old printing machines, the yells of street hawkers drawing attention to their wares.

The room she shares with her four children is on the ground floor of a building constructed in the style known as face-me-I-face-you. Such set-ups are common in Lagos, and basically feature two rows of rooms facing each other with just a passageway in between.

There are nine families living in Kafayat’s building and they all share just one toilet and bathroom.

Her youngest child, six-year-old Abdulbarki, rushes to greet us as Kafayat shows us around the building. Cheerful and chatty, he didn’t inherit his mother’s shyness. Kafayat wants the best for him, she explains, which is why she has enrolled him in a private school. He is the only one of her children to attend one and the fees are 15,000 naira ($76) a semester. But to be able to afford this, sacrifices must be made elsewhere: the boy’s lunch is just plain bread and water, and his mother must try to make the most of the small store she runs.

Made out of a shipping container, she makes dresses in there on an old sewing machine and sells groceries. But she doesn’t have much stock at the moment. In fact, she has had to strategically arrange empty boxes on the otherwise bare shelves.

Kafayat augments her income from the shop by selling cold drinks from an old deep fridge kept in the passageway of the building where she lives.

Later that day, Kafayat has to get the last of her anti-malarial injections. It will be administered by a nurse in the space that she uses as both her bedroom and clinic. The building is in even worse condition than the one in which Kafayat lives.

After getting the injection, Kafayat leaves the nurse’s room and then immediately collapses on a concrete slab outside the door. She stays there for several minutes before she feels well enough to move.

The sweeper is clearly exhausted. But she has plans, she says, for a life away from the dust and grime of the streets.

“This is not the kind of job one should do for a very long time. It saps one’s energy,” she reflects. “…I plan to stop doing this as soon as possible. So, in another year, I hope to have saved enough money … to start my own business.”

The post A day in the life of… a Lagos street sweeper appeared first on African Media Agency.