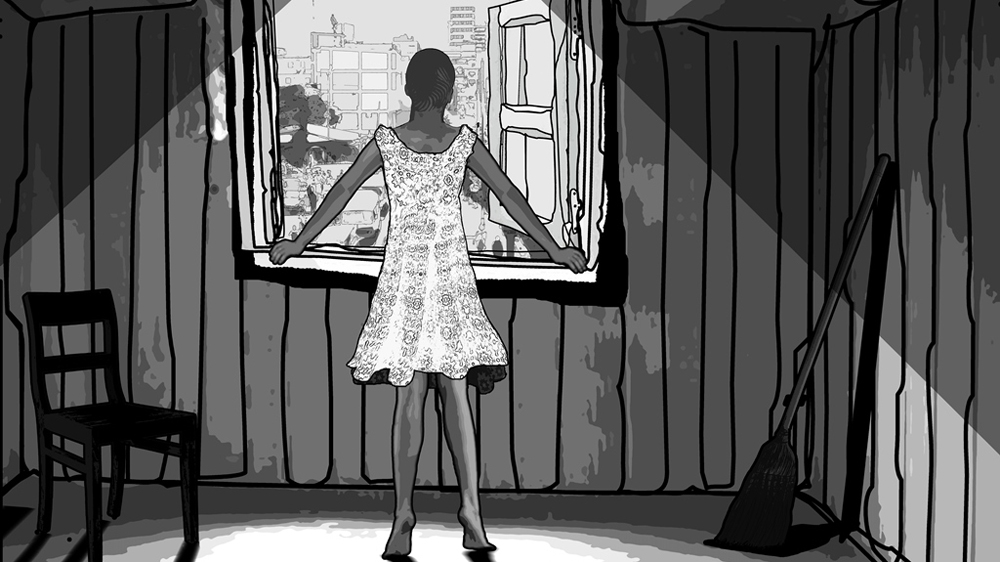 Twelve-year-old Titi does not know her surname. She also does not know that she is from the Republic of Benin and not Nigeria, where she currently works as domestic help – cleaning, cooking, and washing laundry for a family of six.

But she does remember her mother’s first name, and a long journey from her village almost two years ago when she was just 10.

The night before that journey, Titi was at home having dinner with her family when she noticed her aunt packing her clothes into a plastic bag she had bought a few days before.

Her family broke the news: In a few hours she would be leaving to go and work in a town in southwest Nigeria. Her mother and aunt wished her well and then handed her over to the man who would drive her there.

The open truck he drove was crammed full of people; there were so many that some had to sit on the roof of the driver’s cab.

Titi was scared – less about where she was going than the fact that the driver would regularly pull over to hide the vehicle in dense bushes for long stretches of time. It was especially frightening at night.

“The car didn’t have any cover,” she says. “Some of us were children, but not all.”

Eventually they arrived at their destinations – each of them getting out at a different drop-off point.

Titi was delivered to an old woman in a small town. She knew her only as ‘Mama’ and stayed with her for four days, until the woman’s son and daughter-in-law came to collect her. They took Titi to their home in a nearby city.

“At the beginning, I was afraid,” she remembers. “But after about five days, I was no longer afraid because [from] the way everybody was behaving here, [I could tell] they were not wicked.”

And Titi has had experience of “wicked”. For this was not her first job. When she was eight, her aunt took her to work for a woman who owned several shops selling processed food. She already had four girls working for her and Titi became the fifth.

They were each given their own mat on which to sleep on the floor of the living room – and their own koboko cane. Whenever a girl did something wrong, like accidentally breaking a plate, she would be sent to collect her cane. And then flogged with it.

But the cane was not used often, Titi says. The woman preferred to beat them with a wooden ladle.

They were also often hungry. Breakfast was served later and later each day, she remembers. Sometimes they did not eat until 1pm.

When Titi’s aunt turned up at the woman’s house after two years, Titi told her she was tired and wanted to leave. Her aunt explained that it was time to go anyway: Her two year contract had come to an end.

“I don’t know how much it was [that I was paid] but my auntie told me that she gave my mother all my salary,” Titi explains. “But when I saw my mother she told me that they did not give her any money.”

These days, Titi wakes at around 7am – although her employers, whom she calls ‘Mummy’ and ‘Daddy’, sometimes wake her earlier if they are up. Her day begins with sweeping and mopping the floor before she helps Mummy get ready: ironing her clothes, fetching her wigs, cleaning her shoes and serving her tea.

Daddy does not like it when Titi prepares his food; he prefers Mummy to do that, she explains. But Titi makes breakfast for everyone else, including her employers’ teenage children and the security man who guards the gate. After they have all been served, she sits on a stool in the kitchen to eat her own food before continuing with the rest of the day’s chores.

When she first started working here she had from sunrise until sunset to complete her tasks. But since she began primary school last September, she must finish her morning chores before embarking on the five-minute walk to school.

“School starts at 8am,” she explains, “but I always go late”.

Daddy and Mummy registered her at the nearby government school with their own surname since Titi has no idea who her father is or what her mother’s last name is. It is the first school she has ever attended, and she is learning to read and write for the first time.

But, in December, Titi will have been with Daddy and Mummy for two years. That means her contract will be up and it will be time to move on, again. Her eyebrows furrow as she contemplates returning to her village. She says she would not mind going to visit but does not want to stay there.

And she definitely does not want them to send her to work somewhere else, she adds.

She would like to stay just where she is and to continue her education. She came 10th in her class during the exams last term and says she would like to be a doctor when she grows up.

Mummy has told her that she will try to negotiate a new contract that will allow her to remain with them for another five years. That way she will be able to complete her primary education. But they do not know if that will be possible.

Despite all her daily chores, for which she earns 5,000 naira (about $23) a month, Titi says she sometimes felt bored, especially when there was no electricity and she could not watch television. But the arrival of eight-year-old Jumoke, another domestic help, five months ago has changed all that.

The younger girl is from Togo, another of Nigeria’s neighbours, and is in the same class as Titi.

“Jumoke is very troublesome in school,” the older girl explains.

Titi speaks to Jumoke in Yoruba, a language spoken in southwest Nigeria as well as in some neighbouring countries. She translates the younger girl’s responses into English – the only language Mummy and Daddy speak with their children and one she has happily learned over the past 20 months.

“Her mother is dead,” Titi says of Jumoke in English.

Titi also used to know her local language, but while she still understands it, these days she struggles to speak it. Daddy recently employed some labourers and Titi overheard them speaking the same language she knew from her village. She could understand what they said but did not know how to respond.

“They said they will teach me how to speak it,” says Titi.

The labourers were from the Republic of Benin, which is where Mummy says Titi is from. She pays her salary a year in advance to the ‘agent’ who delivered her to Mama, she adds.

Many middle class Nigerians utilise the services of such agents, who often demand between six months’ and two years’ worth of their salary in advance. Just what happens to the people they deliver – boys and girls, men and women, often from neighbouring countries – is rarely of interest to them once they have secured their money.

“My auntie told me that they will use my salary to send me to study tailoring when I finish work,” Titi says. But she has no way of knowing for sure whether the money she earns even reaches her family. And since the day she left Benin, almost two years ago, she has neither seen nor spoken to her mother or aunt.

Titi cannot sleep until she has completed her daily tasks. On a good day, that will be 10pm; on a bad day 2am. But her workload has lightened a little, she says, now that Mummy has banned her children from sending Titi on errands for them.

“Whenever they want me to do anything for them,” Titi explains, “they have to buy me bread or roasted corn. Sometimes, they give me one hundred naira if they want me to wash their clothes.”

The post A day in the life of… a house girl appeared first on African Media Agency.