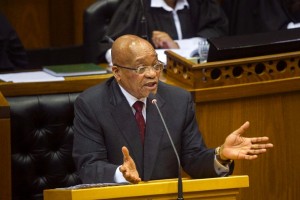 Addressing reporters in Pretoria, Zuma said South Africa suffers from “complex historic problems” that are unique on the continent.

“Other countries in Africa never had a racially based economy,” said Zuma at a briefing where he took stock of reforms implemented by the government since the beginning of the year.

“We are trying to address the legacy of apartheid, and it’s going to be with us a long time,” said Zuma.

“At the same time it (South Africa) must be competing with countries that never had such a challenge.”

The continent’s most developed economy is strangled by sky-high unemployment and power constraints.

In July, Lonmin, the world’s third biggest producer of platinum, announced it was going to cut 6,000 jobs in South Africa. Shortly after, six other mining companies said they would be also cutting staff. The mines say the combination of falling commodity prices and wages that are overtaking the rate of inflation are making business impossible in the country.

Zuma admitted the job losses were a “serious concern” and that the government was hoping to stem the layoffs.

But he said that South Africa was not all “doom and gloom,” insisting the mining sector’s woes were nothing extraordinary.

“It will always happen that in a particular period of a year there will be negotiations,” said Zuma.

With economic growth estimated to clock in at 2 percent this year, South Africa is among the worst-performing countries in the sub-Saharan Africa, which is expected to grow 4.5 percent as a whole in 2015 according to the International Monetary Fund.