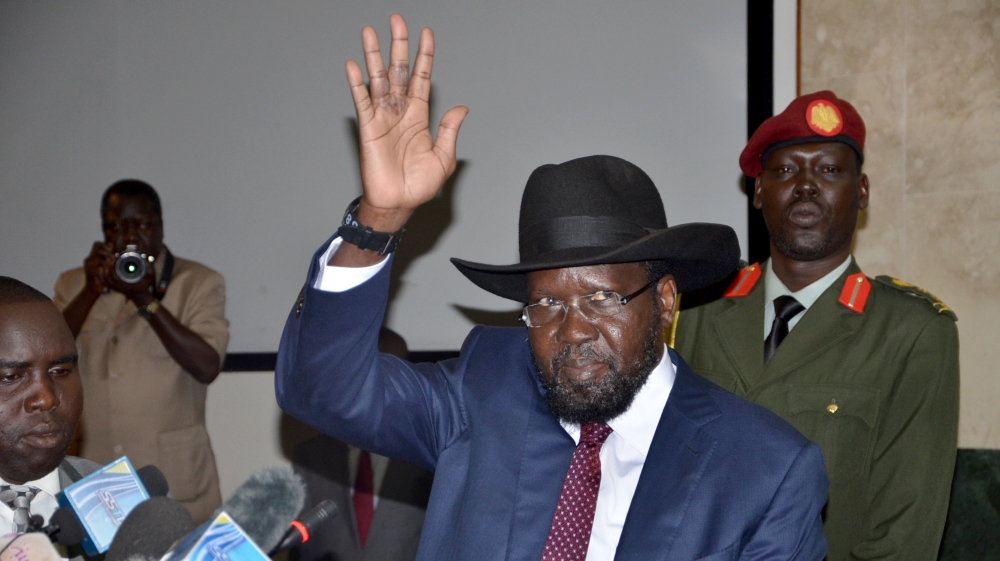 The US is proposing that the UN Security Council impose an arms embargo on South Sudan after its leader surprised rebels and observers by refusing to sign a peace deal.

The US circulated a draft resolution to council members on Wednesday evening, and diplomats said they expected a vote very soon.

“Imminent, I think that was the word,” Gerard van Bohemen, the New Zealand ambassador, said.

The draft also proposes further sanctions, but diplomats did not say who might be targeted.

A senior US diplomat would not reveal when the council would vote on the resolution but said that in order for the body to be influential, it was important to act very soon.

South Sudan’s half a peace agreement

It circulated shortly after Kiir told John Kerry, the US secretary of state, in a phone call that he would sign the peace deal after “a couple of more days of consultation”.

Riek Machar, the rebel leader, signed the deal on Monday.

Previous peace agreements to end South Sudan’s conflict, which has killed thousands since late 2013, have failed.

Kiir said on Monday that he needed another 15 days to think about signing the agreement.

If those 15 days end without the government signing, diplomats say the draft resolution’s punitive actions would take effect.

It was not clear whether all five permanent council members, including Russia and China, support the draft.

“It’s quite a technical resolution, so I think it will take quite a bit of work to get everyone on the same page,” van Bohemen said.

The US State Department said on Monday that it deeply regretted the government decision and urged it to sign within 15 days.

South Sudan has been at war since December 2013, when a split within the security forces in Juba escalated into a violent rebellion led by Machar, who commands the loyalty of some senior army officers and soldiers.

Kiir’s ethnic Dinka people are pitted against Machar’s Nuer, and the ethnic nature of the violence has alarmed the international community.

Numerous rounds of negotiations have failed to end fighting that has killed over 10,000 people and displaced more than two million, with both sides engaging in a war of attrition despite signing ceasefire deals.

If South Sudan’s government will not sign the peace deal, “then we must all be firm on our next steps,” Peter Wilson, Britain’s UN deputy ambassador, told the Security Council.

“We cannot sit by while leaders fight and their people’s suffering grows.”

Last month, IGAD set August 17 as the deadline to end the drawn-out talks, outlining proposals for ending the fighting.

“In the next 15 days, the government will come back to Addis Ababa to finalise the peace agreement,” Seyoum said.

The proposal designates a 30-month transition period with Kiir as president, with a first vice president post allocated to the rebels, IGAD said.

In July, after more than a year of warnings, the Security Council imposed its first sanctions on six generals for fuelling the fighting.