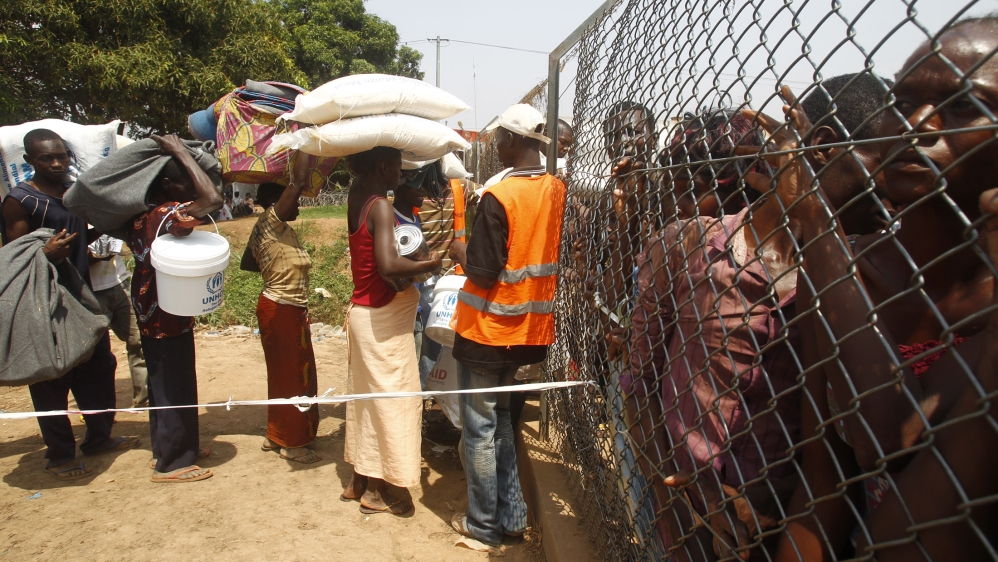 The Central African Republic is geared to become one of the largest humanitarian crises of our time if immediate action is not taken to increase aid to the country, according to the UN.

Aurelien Agbenonci, from the UN’s Office for the Coordination of Humanitarian Affairs (OCHA) for CAR, told Al Jazeera on Sunday that if the shortfall for aid was not met, the UN “won’t be able to continue humanitarian activities till the end of the year”.

Only 31 percent of the UN humanitarian appeal for the CAR has been secured, the UN said.

“This is an extremely trying time for everyone but it would be a critical mistake for the international community to be lulled into thinking that stability has returned to the country,” Agbenonci, humanitarian coordinator for OCHA in CAR, said.

The comments came as one UN soldier was killed, according to a spokesperson for the UN stabilisation mission MINUSCA, when fighting broke out in a northern neighbourhood of the capital Bangui.

“The mission launched an operation to arrest a person wanted by the judicial services for various crimes. Our forces came under heavy fire. One MINUSCA peacekeeper was killed and several others where wounded,” Reuters quoted the unnamed spokesperson as saying.

About a million people have been displaced since Seleka fighters took control of Bangui in March 2013.

Around 2.7 million people, more than half the population, are still in need of aid, while 1.5 million people were affected by food insecurity.

“Putting an end to impunity by bringing perpetrators of human right violations and grave violations against children to justice should be a priority,” Agbenonci said.

Describing the challenges on the ground as “serious”, Juliette Delay, a global communications officer with the UK-based International Rescue Commitee (IRC), said it was still “difficult to characterise the situation in CAR as the biggest disaster of our time given the multiplicity of global crises and especially the situation in Syria”.

“The situation in the Central African Republic is serious […] roughly 50 percent of the population is in need of humanitarian assistance [and] the fact that the state is not able to deliver essential public services such as health care, education, and security.

Delay told Al Jazeera the lack of media attention on CAR is not a symptom of the situation on the ground having improved, other than in Bangui.

Both Amnesty International, the human-rights monitor, and the UN said that there has been a progressive return of internally displaced persons and refugees in the areas, but civilians remain at the mercy of armed groups operating in the hinterland with impunity.

“There might not be enough ‘spectacle’ to make it in the international news agenda, but the IRC continues to operate under difficult conditions in a country which is still rife with insecurity, especially in the countryside,” Delay said.

The UN’s comments from two days after Amnesty released a report documenting the deliberate erasure of Muslims from the country.

Amnesty said that more than 30,000 Muslims were living in seven protected enclaves around the country. Those living outside the enclaves faced a daily daily battle for suvival.

The UN said that targeted attacks have resulted in a massive exodus of the Muslim and Fulani communities from CAR, with the communities still largely under threat from anti-Balaka militia.

The anti-Balaka have specifically targeted the country’s Muslim minority, seen as sympathetic to the Seleka who took over the country briefly in a coup in 2013.

“The humanitarian community is extremely concerned by the situation of the estimated 36,000 people from minority communities in CAR trapped in enclaves living under high risks of attacks,” Agbenonci said.

CAR has been led by a transitional government since January 2014. The country is scheduled to hold presidential and parliamentary elections on October 18.