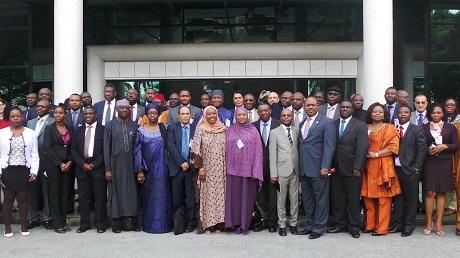 ABUJA, Nigeria, August 27 —Senior Officials dealing with humanitarian and forced displacement issues from Member State and Regional Economic Communities (RECs) of the West Africa Region convened in Abuja, Nigeria, today 26th August 2015, for regional consultations on development and consolidation of the Common African Position on the first ever World Humanitarian Summit (WHS), due to be held in Istanbul, Turkey, in 2016. Organized by the African Union Commission, through its Department for Political Affairs, the three-day West Africa consultation is a part of series of AU regional consultations that aims to stimulate discussion among RECs and Member States on the emerging issues within the global and regional humanitarian landscape. The outcomes of the consultations will be consolidated into an African Common Africa Position to be presented in the WHS 2016. In her keynote address, AUC Commissioner for Political Affairs H.E. Dr. Aisha L. Abdullahi said that the political process involving regional consultations set up by the AU is an opportunity for the African countries to openly discuss humanitarian issues facing the continent at large as well as finding possible solutions to remedy them as a collective. “Africa’s consensus on a future humanitarian agenda should not be a mere narrative for the Istanbul Event, but should offer opportunity for real change in creating a system which is relevant, effective and fit for the future” the Commissioner added. Recalling the continent’s pursuance to realize its own Agenda, Vision 2063 as well as its fundamental values, the Commissioner called for the Common African Position to be anchored on Ideals of Pan-Africanism and Shared Values, which emphasize Solidarity of States and commitments undertaken in various global processes, including in post 2015 development Agenda and Sendai Framework, among others. Speaking earlier, H. E. Ambassador Lamine Baali, Chairperson of the PRC Sub-Committee on Refugees, Returnees and IDPs said, in his welcoming remarks, that the consultation is primarily to reflect and dialogue on the humanitarian situation in the West Africa region and to come up with important strategic issues affecting this region that need to be highlighted in the common African position. He underlined the challenges facing by the region, which include: conflicts, displacements, terrorism and its humanitarian effects, poverty and underdevelopment, the Ambassador said that these challenges indicate the need to establish a link between humanitarianism and peace and security as well as humanitarianism and governance, and a link between relief and development, added that the search for durable solutions must remain at the center of the African common position. In her remarks Hon. Federal Commissioner for Refugees, H.E. Hadiza Sani Kangiwa hailed the African Union in efforts aimed at finding durable solutions. Informed the meeting that the Federal Government of Nigeria had signed and ratified the African Convention for the Protection and Assistance of Refugees. While emphasizing the role States to assist people in need, she pointed out that attention should be focused on building people’s resilience and capacity to achieve self-reliance. Over three days, the West Africa Regional Consultation will consider a number of issues on the Common African Position on WHS as well as the humanitarian situation in West Africa Region. The meeting will reflect on, among others, the humanitarian consequences of Boko Haram insurgencies, ebola epidemic, the emerging issues in the regional humanitarian landscape, and the link between humanitarianism and development, governance, peace and security, humanitarian financing, humanitarian Partnerships, including the role of Diaspora and Civil Society in humanitarian action. The Regional Consultations are aimed at implementation of Executive Council Decision Ex.CL/Dec.817 (XXV), which called on AU Commission, in close collaboration with the PRC Sub-Committee on Refugees and IDPs, to establish an African Common Position that will be presented at the WHS and to report its progress to the Executive Council at each Ordinary Summit leading up to the WHS. The world humanitarian summit comes at a time when the AU is pursuing its own humanitarian agenda and Vision 2063. However, it also comes at a time when the Africa is faced with growing challenges. It is therefore time for Africa to seize the moment, to not only reaffirm its leadership role on humanitarian issues on the continent, but to unequivocally bring to the global agenda her concerns. *Source AU]]>