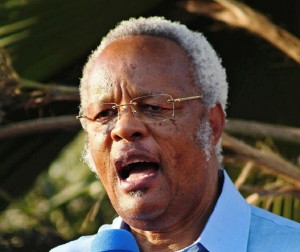 Edward Lowassa, former prime minister of Tanzania and candidate for the opposition coalition “the Coalition of Defenders of People’s Constitution” during a rally on August 10, 2015 (AFP Photo/)[/caption]

Dar es Salaam (AFP) – A coalition of four main opposition parties in Tanzania launched their campaign for the October election on Saturday, vowing to end five decades of the ruling party’s domination of the east African country’s politics.

“We must get rid of the inefficient and corrupt regime under system to bring about an end to poverty, massive unemployment and wanton plunder of the country’s natural resources,” Lowassa said.

The race for the October 25 elections for president, parliamentary seats and civic leaders is seen as the tightest in Tanzania’s history.

The ruling CCM party has dominated politics since modern Tanzania was formed in 1964, and currently has two-thirds of seats in parliament. The four main opposition parties have chosen ex-prime minister Lowassa who defected last month from the CCM to join Chadema, the main opposition party, as their joint presidential candidate.

Other parties in the coalition are NCCR-Mageuzi, National League for Democracy(NLD) and Civic United Front (CUF).

Lowassa, 61, served as prime minister between 2005 and 2008. He had tried to win the CCM nomination, and was widely seen as a frontrunner among 42 candidates, but he lost out to works minister John Magufuli. The CCM is also seen as having been weakened by internal splits and a string of graft scandals and recently witnessed its high profile members, including ex-prime minister Frederick Sumaye and former home affairs minister Lawrence Masha, defecting to join the coalition.

Tanzania, with over 50 million people, is east Africa’s most populous country, with economic growth of more than seven percent, according to the World Bank.

Despite advances, the country remains very poor by regional and international standards, the World Bank says, with agriculture the key sector, providing a quarter of gross domestic product and employing three-quarters of the population.