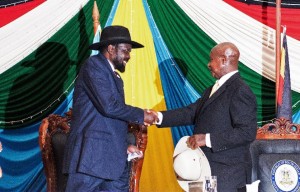 The signing ceremony was held in the capital Juba under the threat of UN sanctions if Kiir failed to put his name to the accord, which had already been signed by rebel leader Riek Machar.

At least seven ceasefires have already been agreed and then shattered within days — if not hours — in South Sudan, which broke away from Sudan in 2011.

“The current peace we are signing today has so many things we have to reject,” Kiir said at the ceremony, attended by leaders of neighboring Kenya, Ethiopia and Uganda.

“Such reservations, if ignored, would not be in the interests of just and lasting peace.”

The United States, the key supporter of South Sudan’s statehood, welcomed the signing and said the peace deal should be implemented as it stands.

“We do not recognize any reservations or addendums to that agreement,” said US National Security Advisor Susan Rice in a statement from Washington.

On the eve of the signing, the UN Security Council had ramped up the pressure on Kiir, threatening “immediate action” if he failed to sign or signed with reservations.

But the council on Wednesday gave Kiir until September 1 to get fully behind the peace deal as it weighed a possible arms embargo and targeted sanctions.

The United States last week presented a draft UN resolution on those punitive measures, which would go into effect September 6.

“The deadline for (Kiir) is September 1,” said Nigerian Ambassador to the UN Joy Ogwu, who chairs the council this month. “He has room to play.”

Tens of thousands of people are estimated to have died in a war marked by ethnic killings and rape that have fueled one of the world’s worst humanitarian crises.

The deal was brokered by the regional eight-nation IGAD bloc, along with the UN, the African Union, China, Britain, Norway and the United States.

The accord commits both sides to end fighting and implement a “permanent ceasefire” within 72 hours, but both the government and rebels accused each other of launching attacks against the other on Wednesday.

The deal gives the rebels the post of first vice president, which means that Machar would likely return to the job from which he was sacked in July 2013, an event which put the country on the path to war later that year.

Fighting erupted in December 2013 when Kiir accused his former deputy Machar of planning a coup, unleashing a wave of killings that has split the country along ethnic lines.

At the ceremony in Juba, the government released a list of concerns to be addressed for the peace accord to take hold.

“It is not a Bible, it is not the Koran, why should it not be revisited?” Kiir said of the deal.

“Let us give ourselves time and see how we can correct these things.” 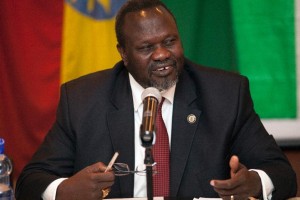 South Sudan rebel leader Riek Machar, a former vice president, signed a power-sharing peace deal on August 17, in line with a deadline to do so (AFP Photo/Zacharias Abubeker)[/caption]

The government cited concerns over provisions on the makeup of a monitoring commission tasked with policing the deal and on the demilitarization of Juba that would give greater powers to the rebels.

Despite Kiir’s reservations, regional leaders welcomed the accord. “This is the day the people of South Sudan have been waiting 20 months for,” said Ethiopian Prime Minister Hailemariam Desalegn.

“This was not a just war, it was an unjust war. It was a wrong war, at a wrong place, at a wrong time — and the sooner you finish it the better,” said Ugandan President Yoweri Museveni.

Under the deal, Museveni has 45 days to withdraw troops that he had sent to South Sudan to shore up Kiir’s forces.

UN Secretary-General Ban Ki-moon welcomed the signing and said the challenge now before South Sudan’s leaders was to implement the peace deal.

“The road ahead will be difficult,” said Ban.

Some 2.2 million people have been driven from their homes in the conflict. About 200,000 terrified civilians are sheltering at UN bases.