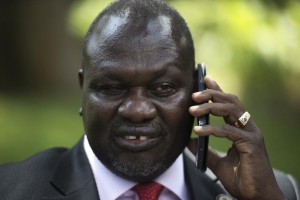 Rebel leader Riek Machar rose to power during Sudan’s 1983-2005 civil war between north and south, after which South Sudan seceded in 2011 to form the world’s youngest country (AFP Photo/Ali Ngethi)[/caption] Addis Ababa (AFP) – South Sudan’s rebel chief Riek Machar ordered his troops to lay down their arms in line with a ceasefire to end a 20-month civil war, his spokesman said Saturday.

His rival, South Sudanese President Salva Kiir, had on Thursday ordered all government troops to stop fighting rebel forces as part of the agreement to end the conflict, which has left tens of thousands dead.

No clashes were reported between the two sides Saturday morning, according to both Machar’s spokesman and the regional eight-nation IGAD bloc which brokered the ceasefire deal along with the United Nations, the African Union, China, Britain, Norway and the United States.

But the government accused rebels of attacking its forces in the strategic northeastern town of Malakal in violation of the deal.

“The rebels yesterday attacked our position in Malakal but they were repulsed and this morning they again attacked Malakal,” said government spokesman Michael Makuei.

“This is a violation of the cessation of hostilities of the agreement and it should be recorded”.

It was impossible to verify the claim independently.

Makuei, who is also minister of information, led the government team at the negotiations over the ceasefire but is believed by observers to be hostile to the peace deal.

The accord gave a 72-hour deadline for a permanent ceasefire, which comes into effect around sunset on Saturday.

The UN Security Council on Friday called for the ceasefire to begin immediately and threatened sanctions against those who undermine the accord.

Machar’s spokesman, Nyarji Roman, earlier Saturday said the former vice president had ordered his rebel troops to lay down their arms in line with the accord.

Machar “gave a declaration of a permanent ceasefire to his troops last night,” the spokesman told AFP.

Kiir’s spokesman, Ateny Wek Ateny, told AFP on Friday the president had ordered the entire army “to stop shooting and remain in their barracks where they are, but they can shoot in self-defence once attacked”.

Late on Thursday, rebels accused the army of attacking their positions in the northern battleground state of Unity. The army did not respond, but has previously dismissed rebel claims as lies, or accused them of launching attacks.

Facing the threat of international sanctions, Kiir signed the deal on Wednesday but annexed a list of reservations that he said would have to be addressed for the deal to take hold in the world’s newest nation.

Machar has said the reservations cast “doubts” on the government’s commitment.

The signed deal gives the rebels the post of first vice president, which means that Machar would likely return to the job he was sacked from in July 2013, an event which put the country on the path to war later that year. 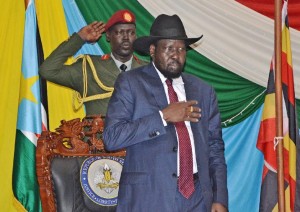 But the 12-page government list of reservations on the peace deal calls this a “humiliation” and a “reward for rebellion”, and insists the post of first vice-president must be on equal footing with the current vice-president, whose post remains.

Fighting erupted in December 2013 when Kiir accused Machar of planning a coup, unleashing a wave of killings that split the country along ethnic lines.

At least seven ceasefires have already been agreed and then shattered within days or even hours.

Over two million people have fled their homes from a war marked by ethnic killings, gang rapes and child soldier recruitment. Some 200,000 terrified civilians are sheltering inside UN bases.

Under the peace deal, a “transitional government of national unity” will take office within three months.