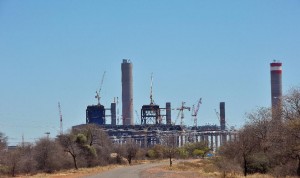 The Medupi station seen under construction on October 7, 2011, outside the northern South African town of Lephalale (AFP Photo/Alexander Joe)[/caption] Johannesburg (AFP) – President Jacob Zuma inaugurated on Sunday the first unit of a massive new coal-fired power plant in South Africa, hailing it as a step away from the country’s energy woes.

The Medupi power station, situated north of Johannesburg, is to produce 4,800 megawatts of electricity by 2019, when it is expected to be operating at full capacity.

South Africa has suffered through rolling blackouts, known as load shedding, as the state-owned utility Eskom has sought to ease pressure on its stable of ageing and poorly-maintained power stations.

South Africa last new gas-fired power plant opened in 2013, while a new coal-burning plant has not come online since 1996.

“Today we open an important and exciting chapter in our country’s energy history,” Zuma said.

“Shortage of energy is a serious impediment to economic growth,” he added.

Construction on Medupi began in 2007 and was supposed to be complete five years later. Yet delays have meant that the plant, which South African authorities call the country’s largest coal-fired station, will be fully operational some seven years late.

The new plant’s first unit began operating in March and its 749 megawatts of electricity should help ease the stress on the country’s troubled electrical grid.

Another coal-fired plant is under construction in Kusile, east of Johannesburg, and it is expected to pump out a flow of electricity similar to Medupi, but that project has also been hampered by major delays.

“It’s too premature to say that it’s the end of load shedding with this inauguration,” energy specialist Chris Yelland told AFP.

“On Monday, a unit of the Koeberg power plant will be shut down for maintenance for three months,” he said, referring to the country’s only nuclear station north of Cape Town.

In May, Statistics South Africa fingered the rolling power cuts for slowing the country’s growth to a disappointing 1.3 percent in the first months of 2015. The country’s annual production is about 40,000 megawatts.

Eskom generates more than 95 percent of South Africa’s electricity and has been weakened by years of underinvestment, ageing coal-fired infrastructure and governance problems.