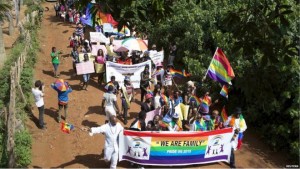 Seven men have been jailed for six months in Senegal, after they were found guilty of homosexuality.

A court in Dakar heard police caught the men having sex during a raid. The mother of one of the accused told the authorities her son was gay, but she failed to show up as a prosecution witness at the trial. Homosexuality is banned in the west African country. It is punishable by up to five years in prison and fines of up to $2,500 (£1,500). Defence lawyer, Abdoul Daff, said the mother’s failure to appear in court should have caused the case to collapse. “There was neither material evidence nor testimony in order to corroborate the claims,” he added. “So, we take note of this and we will see what to do next.” Where is it illegal to be gay? Senegal’s population is more than 95% Muslim, and people in same-sex relationships are often forced to hide their sexuality. Gay rights activist Djamil Bangoura from the group Prudence said he was disappointed by the verdict. “It is such a pity to see these Senegalese men condemned in front of everyone just because they are gay,” he added. During a recent trip to Kenya, US President Barack Obama called on African nations to ensure gay men and women are treated equally. Homosexuality is illegal in 38 countries on the continent and is punishable by death in Sudan, Mauritania, Somalia and northern Nigeria. *Source BBC]]>