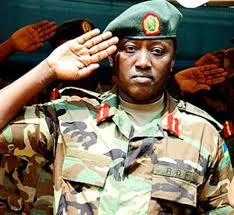 General Karenzi Karake[/caption] The U.K. has rejected a request by Spain to extradite Rwanda’s intelligence chief on allegations he committed war crimes following the Rwandan genocide 20 years ago, according to the African government. General Karenzi Karake, director of the nation’s National Intelligence and Security Service, had been on bail awaiting an extradition hearing since he was arrested at Heathrow Airport in London on June 20. Karake was one of 40 senior officials in the Rwandan government indicted by a Spanish judge in 2008 for alleged war crimes in the aftermath of the 1994 Rwandan genocide. The government condemned the arrest of Karake, who had been in the U.K. on an official visit, and President Paul Kagame characterized it as a show of contempt for Africa. Karake’s “arrest was an abuse of law and violation of his diplomatic immunity,” Rwandan Justice Minister Johnston Busingye said in a text message on Monday.

Rwandan Foreign Affairs Minister Louise Mushikiwabo said she was “delighted” by the ruling and that Karake was on his way back to the East African nation. “This was an unnecessary and abusive process,” she said on her Twitter account. “He’s now free. Should never have happened.” About 800,000 people were killed between April and June 1994 when Hutu extremists massacred Tutsis and moderate Hutus. Kagame led a Tutsi force known as the Rwanda Patriotic Front, which Karake was part of, that helped end the killings before taking power. As the country’s ruler, Kagame has earned praise for his economic agenda and criticism for quashing dissent. *Source Bloomberg]]>