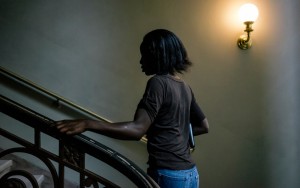 Lily, who escaped from Boko Haram during the kidnapping of almost 300 girls in Nigeria, on a recent tour of the National Museum of Natural History in Washington, D.C.Greg Kahn / GRAIN for Al Jazeera America[/caption] WASHINGTON — Lily had sworn never to go back to school. After being kidnapped from her high school in Chibok, Nigeria, by armed group Boko Haram, the 18-year-old planned to leave education behind and do what her family had been doing for generations — farming. School was not safe any more. Boko Haram kidnapped Lily and 275 other schoolgirls one night in April 2014. In a remote town in northeastern Nigeria, the radical fighters grabbed Lily and the others as they slept inside the local high school’s dormitory. They stuffed them into trucks and drove off into the night with a convoy of squealing, terrified high school students. Lily said her heart was pounding, and she closed her eyes and prayed. Hours after her capture, she found the courage to jump out of the moving truck; a friend followed her. She ran through the bushes in the middle of the night, and made her way back home. After that, she resolved never to return to school. The mass kidnapping of almost 300 Nigerian girls captured the world’s attention. Boko Haram had rampaged across northeastern Nigeria for five years, but the Chibok kidnapping gained the group worldwide infamy and revulsion. Boko Haram, a phrase that loosely translates as “Western education is forbidden,” aims to a government rule by an extreme interpretation of Shariah law. Since 2009, the group has spilled blood across the region, bombing, looting and kidnapping. Activists in Nigeria birthed the Bring Back Our Girls campaign, demanding the Nigerian government to find the schoolgirls who were still missing. Only 57 of the girls had escaped, and they did so with no help from the Nigerian government. The likes of First Lady Michelle Obama, celebrity TV personality Ellen DeGeneres, and Pakistani education activist Malala Yousafzai carried signs marked #BringBackOurGirls. Meanwhile, Emmanuel Ogebe, a U.S.-based Nigerian human rights lawyer collaborated with a couple in Nigeria to help bring some Chibok schoolgirls who had escaped from Boko Haram to the United States. [caption id="attachment_20270" align="alignright" width="300"] 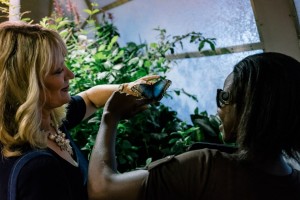 Lily has a butterfly land on her hand while touring the butterfly pavilion at the National Museum of Natural History in Washington, D.C. with Deanna Gelak, human development expert.Greg Kahn / GRAIN for Al Jazeera America[/caption] “Schooling is an incredibly high-risk activity in northern Nigeria,” Ogebe said, explaining that girls freed from Boko Haram captivity could face security risks, survivors’ guilt and discrimination from their community. “Most had been stigmatized as a ‘Boko Haram’ wife, which further traumatized them,” Ogebe said. Lily was made fun of after her escape; leaving Nigeria offered her a chance to change the course of her life. Lily and nine other girls arrived in the U.S. last year, between July and December. The three Nigerian activists, who later formed Education Must Continue Initiative, helped them obtain U.S. visas so they could attend reputable private schools that offered scholarships for them. Initially they attended two different schools, with some of the girls on the West Coast, but now all are attending the same school in Virginia. Lily was back in school. “I know I said I would never go to school again but things have changed,” Lily said with a smile. “I am in America!” The girls recently went back to class after a summer break that included trips to the White House, museum and a national tour with a church choir. Host families housed the girls during the summer vacation. Murna, 19, discovered she has motion sickness and cannot sit in a car for long. Lily has not acquired a taste for American food. Sometimes, Lily’s mind wanders to Nigeria, to Chibok, to Boko Haram, to her best friend Dorcas, who was abducted with her and is presumably still in the clutches of Boko Haram members. Dorcas and Lily grew up together as neighbors. “She is still inside Sambisa,” Lily says. “I miss her so much. She is a very good person.” Sambisa Forest, a 40,000 square-mile stretch of nature reserve in northeastern Nigeria, is believed to be Boko Haram’ main hide out . Many believe it’s where the 219 Chibok schoolgirls still missing are being held. More than700 captives have been freed from Boko Haram, according to the Nigerian military. Amnesty International estimates that Boko Haram has abducted more than 2,000 people, mostly women. The group has formed an official alliance with the Islamic State in Iraq and the Levant (ISIL, also known as ISIS), calling itself the Islamic State West African province. Murna, 17, says she used to have nightmares about Boko Haram. “I had a dream that Boko Haram came to America on a plane and entered into the house to kidnap us and take us back to Nigeria,” she said. Murna, a tall and animated teenager, said she had several similar nightmares and is only recently beginning to cope with the trauma she endured. Murna often spends her time braiding extensions into her hair. Lily and Lovely, 18, like to sit together and watch Nigerian movies on the iPads they borrowed from their school. They are acquiring new skills: learning to play violin, becoming tech-savvy and logging into Skype to video chat with friends, improving their use of American English. “These young ladies immediately impress with their effervescent personalities and sweet dispositions. After simply giving them a ride in the car, they thanked me,” says Deanna Gelak, an education specialist who is hosting one of the girls. Gelak describes them as young ladies with a “special grace, good nature and wit.” Lily, Lovely and Murna do not yet know what the future holds for them. They think often about their friends and families they left behind in Nigeria, but are uncertain of returning to live in their home country. Lily watches a video message from her parents, sent to her via Facebook. She listens to her mother pray for her in her native Kibaku language. The sight of her elderly, white-haired father makes her cry. She turns her head away and sniffles. When asked what her mother said in the video, Lily says, “She told me that Boko Haram came to attack Chibok again but that I should not worry. They are fine.” Murna prays every day for the safety of her father who is a police officer in northeastern Nigeria. Lovely’s father was recently killed by Boko Haram. She was not able to attend his funeral. The girls sometimes feel they are too distant from their loved ones. But, they are carving new relationships in the United States. Inspired by Ogebe, the Nigerian lawyer who helped bring them to the United States, Lily and Lovely have decided to become lawyers. Murna wants to be the first medical doctor in her family. They all hope for a Nigeria free from Boko Haram, where all girls will feel safe enough to go to school. *Source Al Jazeera]]>