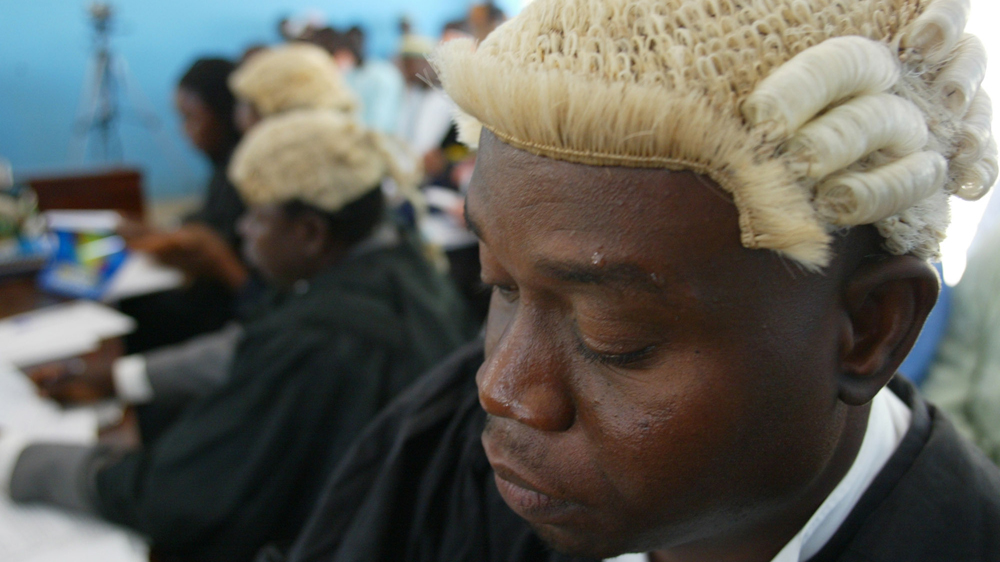 Lagos, Nigeria – As much of the rest of the world geared up to celebrate winter holidays in December last year, a group of 54 soldiers formerly deployed to fight Nigerian Islamists stood in front of a court martial in Abuja.

Among them, one young man listened in shock as the court found him guilty of mutiny and sentenced him to death by firing squad.

“We did not fire on anybody. And we didn’t threaten anybody. They are just punishing us for an unknown sin,” he explained over the phone from Lagos, where the soldiers are being held in military detention.

Their only “rebellion”, he said, was to ask for weapons before undertaking an offensive against Boko Haram fighters who have caused the deaths of nearly 15,000 people during a six-years of fighting in Nigeria’s northeast.

After almost eight months in custody, their panic is rising.

“Things are going as if we are not in the civilian regime any more,” the soldier said, referring to previous periods of military rule.

“Soldiers were never sentenced like this before,” argued Femi Falana, a human rights lawyer who represents the soldier and the 53 convicted with him.

In total, Nigeria sentenced 70 soldiers to death in 2014, in trials which were perceived by many as an attempt to shift blame for the failure to curb Boko Haram’s bloody expansion

“They are being persecuted for the failure of the state,” Falana stated.

Those convictions have contributed to a huge spike in the number of death sentences awarded in Africa’s most populous nation.

Some 659 people were sentenced to hang or die by firing squad in 2014, Amnesty International found in a report earlier this year, compared with 141 the year before.

China is believed to sentence and execute thousands of people annually, but it keeps its data secret. In 55 countries tracked by Amnesty last year, Nigeria accounted for over a quarter of the total 2,466 death penalties handed out.

Chinonye Obiagwu, a lawyer who chairs Nigeria’s Human Rights Agenda Network, explained that this is partly because Nigeria imposes a mandatory death sentence on non-heinous crimes like armed robbery. Adultery and sodomy are also punishable by death under the Islamic law in effect in the predominantly Muslim north.

“There is huge public support for the death penalty – about 65 percent,” he explained from his Lagos chambers. Such sentiment may be boosted by feelings of insecurity over the course of the insurgency, Obiagwu added.

“When there is armed conflict there is always a tendency for the society to support capital punishment, not only for military offences but also for crimes like armed robbery. So armed conflict increases the possibility of conviction and sentence,” Obiagwu said.

This worries activists who believe that the system is skewed to discriminate against the poor.

The rich who are picked up can afford bribes, bail and lawyers. Those who cannot often bear the scars of brutal torture by security forces who extract confessions under duress.

Moses Akatugba, who was illegally sentenced to death as a minor in 2005, and is now free, was a victim of one such pick-up. Aged just 16 at the time of his arrest for armed robbery, he recalls being shot in the hand before being taken into police custody, where he was beaten and tied up in an interrogation room.

“They brought the statement and wanted me to say I was the one to write it, but I was not,” he remembers. “In the same hand I was shot, they pulled out the nails with pliers. It was a hell of a thing I went through.”

Justine Ijeomah of the Port Harcourt-based Human Rights Social Development and Environmental Foundation reckons that, like Akatugba, 90 percent or more of those on death row are poor.

“Politicians steal billions, increase poverty, and they are free,” he raged from his modest office, where international awards lie gathering dust against the wall. “The victims are victims of a bad system created by corruption,” Ijeomah said.

In reality, only a handful of men have been hanged since the return to civilian rule 16 years ago, the last of them in 2013, so most of those on death row will never be executed.

In part, that’s because appeals processes can take years. But governors are also increasingly wary about the ramifications of signing death warrants.

The relatively liberal Lagos State bans executions by hanging or firing squad, and has a historical policy of commuting death sentences to life imprisonment, according to Ayo Obe, a lawyer who previously chaired an advisory committee on the exercise of the prerogative of mercy.

In May, the day before Uduaghan stepped down, he granted a pardon to Moses Akatugba.

The 54 condemned soldiers were heartened when the army announced this weekend that it would review their sentences.

Lai Mohammed, national publicity secretary for the new Nigerian government that has been in power since May 29, did not respond to calls and text messages on whether it would review Nigeria’s death sentence.

For many of those behind bars, knowing that they will never actually hang is scant consolation.

As convictions clock up, the number of people on death row in Nigeria has ballooned to between 1,000 and 1,500, campaigners estimate. Appeals processes take years and case files can often be lost, condemning inmates to languish there indefinitely.

“We have six people in a cell of 8×9 feet,” he said from the prison chapel, which unlike the cells is well-kept using money from charity.

There are no beds, and – at night – no toilet. “We just have to use a plastic bowl between 6pm and 8am,” he said. “Sometimes, we just suffocate.”

At 68, Olukolu doesn’t know if he will see the outside of the compound ever again.