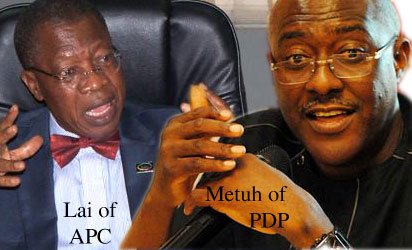 Barely 24 hours after the ruling All Progressives Congress (APC), accused the former ruling  Peoples Democratic Party (PDP) of pervasive corruption that needed to be cleaned, before Nigeria will be able to actualize its potentials, the PDP, has responded, accusing the Presidency and the APC of deliberately resorting to diversionary blackmail and overused excuses to shy away from providing answers to the salient issue of unprecedented damage done to the nation’s economy in its 90 days in office. The PDP said that rather than hide their heads in shame for poor performance in the last 90 days that has resulted in the sudden economic retrogression, the worst ever experienced by the nation, the APC and Presidency continue to grope and look for excuses. PDP National Publicity Secretary, Olisa Metuh, in a statement on Sunday, said discerning minds were appalled that instead of providing answers to issues of economic retrogression, the Presidency and the APC have resorted to wild allegations and insults to attempt to cover their ineptitude and divert attention from their list of bogus promises which they have no intention to fulfill. “The PDP has severally expressed its support for a holistic fight against corruption and we have challenged the Federal Government to investigate and prosecute all corrupt persons irrespective of ethnic and political affiliations. We are therefore appalled that instead of getting serious with the challenges of governance, the APC is bent on inventing excuse for its crass incompetence to create and manage wealth, to the detriment of the nation. “We challenge the APC and the Presidency to be honest enough to respond to issues instead of resorting to propaganda. Is the so-called mess clearing an answer for the adamant stance of the APC and President Buhari in running a government without a cabinet and precise fiscal policy direction, a strange totalitarian approach that has taken serious toll on the economy and the polity in general? “Is it an answer to the resort to constitutional violations, abuse of financial regulations, halting of development projects and the pervading uncertainty that resulted in the retarding of domestic and foreign direct investments with attendant avoidable losses to Nigerians? “What has the APC and the Presidency to say to the official report by the National Bureau of Statistics that while they are busy celebrating imaginary achievements, the economy is running aground with real Gross Domestic Product (GDP) plunging with about 2.35%, with job creation dropping by 69 percent under their watch? “Are we not already experiencing the consequences of abuse of rules such as the foisting of foreign exchange transaction restrictions in violation of the Foreign Exchange Monitoring And Miscellaneous Provisions Act, otherwise known as Decree No. 17 of 1995? “What is the APC-led government’s answer to the report by Fitch Rating, which alerted that Nigerian banks and other businesses in the sector are now at risk following the economic slowdown occasioned by the incompetence of the President Buhari-led APC government? “Why have the government and the APC refused to provide answers to the recent depleting of funds inherited from the previous administration without recourse to appropriate statutory arms of government, while no corresponding improvement has been witnessed in the economy? “We challenge this administration to present to Nigerians a score card of investments it has made in any critical sector of the economy in the last 90 days. What investment has the Buhari administration made in power, health, education, the railway or petroleum sectors in the last 90 days, to warrant its posturing on achievements? “Is the APC not artfully seeking to appropriate the achievements made by the PDP-led administration; such as the effort in ending polio, the improvement in power supply, the reopening of the refineries, among others which are dividends from numerous investments by the previous administrations? “While we expect the present administration to be serious about the fight against corruption by ensuring that all corrupt persons are brought to book, especially those who, as major beneficiaries of corruption and sleazes associated with themselves and their allies, believe they now are now safe, as members of the APC. In the same vein, we restate our caution against the current drama of politicizing the issue of corruption in the country, while turning blind eyes to reports of sleazes going on unchecked in government quarters under the current administration. *Source Vanguard