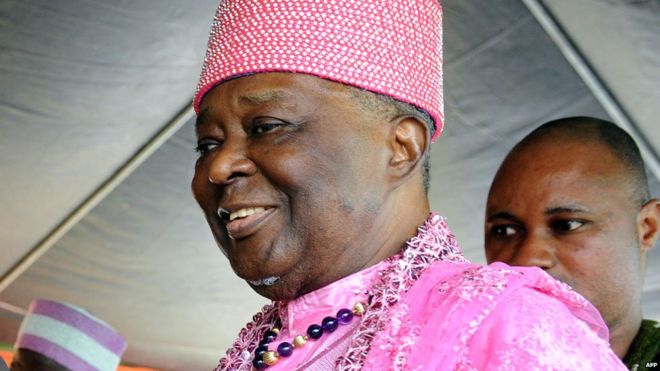 A revered monarch in south-west Nigeria, the Ooni of Ife, has been buried after thousands attended his funeral, a mourner has told the BBC.

Traditional rites to honour Oba Okunade Sijuwade – a king of the Yoruba, Nigeria’s second biggest ethnic group – are being held in the city of Ife. Dignitaries, including Nigeria’s Vice-President Yemi Osinbajo, paid their respects before the private burial. The 85-year-old sovereign was crowned in 1980 and was widely respected. He died in London in July but his death was only announced on Wednesday. He was considered the most influential monarch by most Yorubas, who number about 35 million in the region. Nigeria’s many monarchs vary in hierarchy and importance and some like the Ooni of Ife and the northern emirs rule over large areas, while others are traditional rulers of a village or town. Ooni of Ife: Nigeria’s many monarchs Abubakar Madagali, the leader of the Hausa ethnic group in Ife, told the BBC Hausa service that both Christian and Muslim leaders offered special prayers for the late king before he was buried. The ancient city of Ife is very quiet and people are in mourning. Banks and businesses have shut, Mr Madagali said. “We have been told to close to our businesses for seven days.” Analysis: Nigerian journalist Sola Odunfa Customs were fully adhered to at the funeral for the Ooni of Ife, his body was not displayed neither was any mention made of his burial. An inter-denominational Christian religious service was organised by the royal family on the palace premises. Dignitaries, priests and a choir were there, but there was no casket. This is because in Yorubaland, which refers to south-west Nigeria, Togo and Benin, a traditional ruler does not die: He only goes on a journey to join his ancestors. The moment he dies his immediate family are required to hand over his body to a traditional “cult” – a religious secret society – which will immediately begin the necessary rites. Details of the burial will remain secret. The powerful “oro cult” has declared a night curfew on Ife, which will last seven days. Meanwhile qualified princes within Ife’s ruling houses have started putting forward their candidacy. The job of choosing a successor rests squarely on the kingmakers from within the family in consultation with their oracle, known as Ifa. They have no time limit to make their decision. Nigeria’s President Muhammadu Buhari said the traditional ruler would be remembered for his “worthy service and invaluable contributions” to the sustenance of the cultural heritage of his people. “Oba Sijuwade had lived a very fulfilled life, and has left worthy legacies for his successors to build upon,” he said in a statement. He was a successful businessman at the time he was crowned – making much of his money from importing vehicles. A southern Christian, he was a close friend of one of Nigeria’s most revered Muslims leaders from the north, the late Emir of Kano, Alhaji Ado Bayero. His relations with the Emir, who died last year, helped bring about peace and stability between the country’s two main religious communities. *culled from BBC]]>