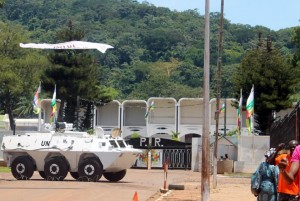 The 12,000-strong MINUSCA force, which took over from an African Union mission nearly a year ago, has been plagued by a series of allegations involving its peacekeeping forces (AFP Photo/Pacome Pabamdji)[/caption] Kinshasa (AFP) – Three UN soldiers from the Democratic Republic of Congo accused of rape in the neighbouring Central African Republic will be put on trial, the justice minister told AFP on Thursday.

The soldiers are alleged to have raped three young women — the latest in a series of claims against the UN mission in the Central African Republic, known by its acronym MINUSCA.

“I have ordered General (Joseph) Ponde, the prosecutor of the armed forces, to start proceedings (based) on the dossier the UN has put at our disposal,” Justice Minister Alexis Thambwe Mwamba said.

He said Kinshasa would not “tolerate” such acts, adding that the accused would be repatriated and judged in a military court.

The rapes allegedly took place in the town of Bambari, northeast of the capital Bangui, in recent weeks. The victims’ families notified the mission on August 12. One of the alleged victims is a minor.

UN spokeswoman Vannina Maestracci confirmed the allegations to reporters on Wednesday but declined to name the nationality of the accused troops.

Sources said they were from DR Congo.

The 12,000-strong MINUSCA force, which took over from an African Union mission nearly a year ago, has been plagued by a series of allegations involving its peacekeeping forces.

There have been at least 61 claims of misconduct against them, 12 of which involve sexual abuse. That led UN chief Ban Ki-moon to declare “enough is enough” and announced last Thursday he had sacked the mission’s chief, Senegalese general Babacar Gaye. Ban has denounced sexual abuse in UN peacekeeping as a “cancer in our system” and vowed to name and shame countries that fail to take action against their accused soldiers.

UN peacekeeping officials had requested an urgent meeting with DR Congo officials to discuss the latest allegations and gave them 10 days to decide whether to investigate.

Under UN rules, it is up to the troop-contributing country to investigate and prosecute soldiers accused of misconduct while serving under the UN flag.

The Central African Republic is struggling to recover from sectarian violence that exploded after a 2013 coup, pitting mainly Muslim rebels against Christian militias.