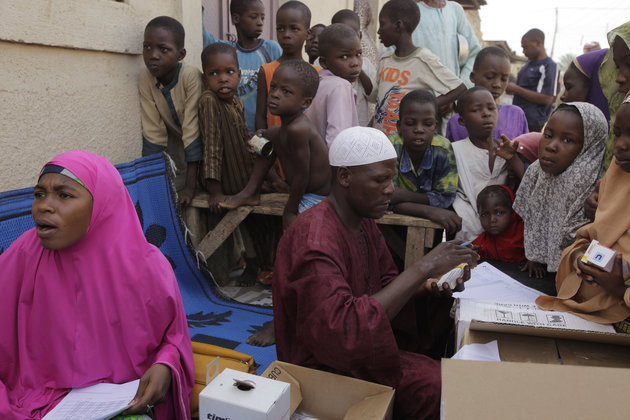 Children wait to receive polio vaccine in Kawo Kano, Nigeria, Sunday, April. 13, 2014. Nigeria is one of three countries in the world where the wild polio virus remains endemic, and an Islamic uprising in the northeast is halting progress against it as nine women vaccinating children were shot and killed a year ago by Islamic extremists. (AP Photo/ Sunday Alamba )[/caption] Tuesday marks one year since Africa has had any new polio cases, a monumental step toward the continent being completely rid of the disease. Since a case was recorded in Somalia a year ago, there has been no evidence of any new incidents, an accomplishment advocates attribute to a collaborative, multi-tiered effort, UNICEF noted. Volunteers, religious leaders, health workers and government agencies have banded together to bring vaccines to rural areas and to dispel myths associated with getting the shots. Polio mainly affects children under 5 years and can lead to irreversible paralysis and death in some cases when breathing becomes compromised, according to the World Health Organization. The disease has never been stopped in Afghanistan, Pakistan or Nigeria, according to NPR. While Somalia has had its hopeful moments over the years, the disease hasn’t yet been completely wiped out. After three polio-free years, the disease resurfaced in 2005 in Somalia with 185 confirmed cases, and smaller outbreaks the following three years, according to UNICEF. In 2008 there was an outbreak in Jonglei State, close to the border with Ethiopia. “It is hard to describe the isolation of this place — an area of marshes, vast cotton-soil plains that become impassable after rains, and an area that has long been plagued by insecurity,” Peter Crowley, head of UNICEF’s polio unit, wrote in a blog post. Yet, despite such challenges, the outbreak was contained and the area has not experienced a new case since. To effectively protect Somalians from the disease, advocates have looked to religious leaders to urge their congregants to get vaccinated. Some parents resisted getting their children vaccinated, saying that it conflicted with their religious beliefs. But in 2007, the country saw a major breakthrough when 40 religious leaders from North East Somalia declared their support for polio prevention efforts. “We agree with the conclusions of the doctors,” Hagi Ali Ahmed, a sheikh from Puntland, said in a statement. “Rumors were wrong. Religious leaders must create awareness in all mosques and among the community.” Nigeria is also on its way to becoming polio-free. July marked a year since the country had recorded any new polio cases, NPR reported. There, health workers also contended with deleterious pushback. Vaccinators were periodically attacked and killed because religious leaders believed their work to be part of a Western plot to sterilize Muslim children.  While health workers have made extraordinary gains in assuaging suspicions in Nigeria and Somalia, religious leaders have recently grown wary of vaccine campaigns in Kenya. The country’s Conference of Catholic Bishops recently boycotted WHO’s polio vaccine campaign until it can verify that there is no presence of estrogen in the shots, NPR reported. Dr. Wahome Ngare of the Kenyan Catholic Doctor’s Association accused the organization of introducing female hormone that could sterilize children. Though health workers and advocates are celebrating Somalia’s latest polio milestone, they’re not at ease just yet. It will take another two years before the country can officially declare itself polio-free. “While today’s milestone is extraordinary, it is not an endpoint,” Crowley said. “Nigeria and the many other African countries that remain at risk for polio must maintain high-quality surveillance, work ever-harder to improve the quality of vaccination campaigns and act decisively, should further outbreaks occur.” *Source Huffpost]]>