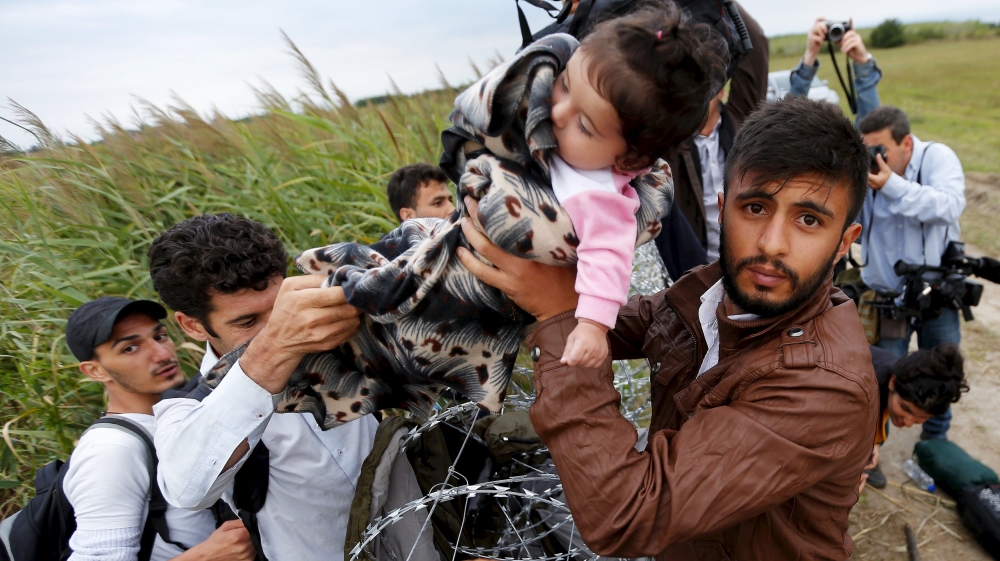 Hungary has announced it will deploy 2,100 police officers to help control its border with Serbia as record numbers of refugees try to enter the state trying to claim asylum.

The Hungarian police chief’s announcement on Wednesday came amid scenes of brief violence on the country’s border with Serbia.

Police rounded up around 300-400 migrants and were addressing them through loud speakers, the Reuters news agency reported.

Al Jazeera’s Andrew Simmons, reporting from the Serbian capital Belgrade, said the violence broke out after hundreds of refugees refused to be fingerprinted.

“What people want to do is leave Hungary and move on to more affluent EU states, such as Germany, Holland and the UK.”

A total of 2,093 refugees, the highest daily total to date, crossed the border near the Hungarian town of Roszke on Monday, a police statement said.

Thousands of Syrian refugees are trying to cross the border everyday, leading to a call by the UN refugee agency (UNHCR) to come up with a new strategy to solve the crisis.

The agency said that all European countries and the EU must act together to provide support to countries such as Greece, Macedonia, and Serbia whose capacities were overstretched. It also called for the equitable redistribution of refugees across the EU.

“It’s vital that these people are treated humanely, also that essential assistance is provided, not just by responding to their basic needs but respecting also their dignity, their human rights as asylum seekers and migrants,” UNHCR spokesperson Melissa Fleming told a news conference in Geneva on Tuesday.

The UNHCR’s calls for reforms came a day after German Chancellor Angela Merkel and French President Francois Hollande called for a unified system for the right to asylum, and the setting up of reception centres in Greece and Italy.

Germany, a country that has taken a leading role in welcoming refugees in the EU, is now advising officials who process their arrivals not to send people from Syria back to other European countries.