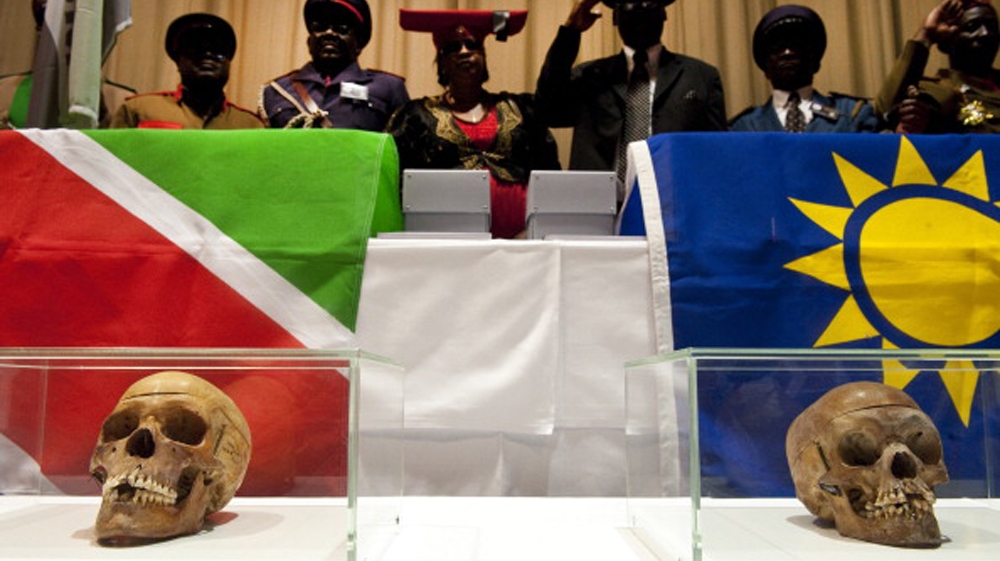 On July 6, a delegation of Namibian leaders, lawyers, and heads of civic organisations, arrived in Berlin hoping to meet with German President Joachim Gauck, to present him with a petition signed by over 2,000 German public figures including members of the Bundestag, the German national parliament.

The document, titled ” Genocide is Genocide “, called on the German government to accept “historical responsibility” for the genocide perpetrated against the Herero and Nama people over a century ago.

In January 1904, inhabitants of Namibia, the Herero rose up against German rule, and the colonialists – deploying weaponry that would later be used in World War I – responded mercilessly.

It was in October 1904 that General Lothar von Throtha, the Reich’s commander in German “South-West Africa”, issued his infamous extermination order – to kill any Herero, armed or not, found within the borders of German colonial territory.

As the Herero fled into the desert towards Botswana, the German authorities sealed off the border.

Thousands died of thirst and starvation, the rest were sent to concentration camps.

The skulls of thousands of victims who died in battle or in the camps were sent back to Berlin for racial analysis, to support then current anthropological theories of European supremacy.

The latest efforts by Herero and Nama leaders to get recognition and reparations from the German government came just as both countries marked the centenary of the end of German rule in Namibia on July 9.

Over the last decade, a movement has emerged in Namibia calling for an acknowledgement of Germany’s crimes.

In 2001, the Herero People’s Reparations Corporation filed a civil lawsuit with a US court requesting $2bn in recompense from the German government and several corporations.

The legal case was unsuccessful, but the campaign did raise awareness and put pressure on politicians.

I n 2004, at the hundred year anniversary of the Herero uprising, Germany’s development aid minister expressed regret for the mass killing.

Speaking in Windhoek, the Namibian capital, Heidemarie Wieczorek-Zeul stated: “We Germans accept our historic and moral responsibility and the guilt incurred by Germans at that time”.

She also said: “The atrocities committed at that time would have been termed genocide.”

But the minister dismissed calls for financial compensation for the victims’ descendants, instead promising development aid and stronger German-Namibian bilateral ties.

Many Namibian activists thought the minister’s statement did not go far enough – and were annoyed by the idea of development aid as reparations.

The campaign has in recent years achieved some significant symbolic victories.

In 2011, the skulls of 20 victims of the genocide – for decades stored at the Berlin Medical Historical Museum – were handed over in an official ceremony to a Namibian delegation.

Also, just weeks ago a motion was submitted in the German parliament by the Left Party calling on Angela Merkel’s government to apologise to Namibia, and repudiating the effort to use development assistance to deal with the historic trauma, calling it “a unilateral move, made without consulting the Namibians”.

The motion , presented by Niema Movassat, chairperson of the Left Party in the Committee on Economic Cooperation and Development of the Bundestag, said development assistance is entirely different from “restorative justice”, which requires that the injustice first be recognised.

Partly in response to the political ferment in Germany around the country’s colonial past, German Foreign Minister Commissioner for Africa George Schmidt has travelled to Namibia twice this year for talks.

When the Namibian leaders – now adopting the motto ” Volkermord verjahrt nicht” (“Genocide doesn’t have a statute of limitations”) – arrived in Berlin, they were feeling bullish.

They were planning to reiterate their demands for an apology, reparations, and for the repatriation of the remaining skulls to Namibia.

Yet by the second week of July, reports emerged that the Namibian delegation was given the “cold shoulder”, did not get to meet with President Gauck, and that the petition was handed to a lower-level bureaucrat in the president’s office.

The Herero leader, Chief Vekuii Rukoro, who led the delegation, was displeased by the reception.

He denounced the German government, saying: “The refusal of the German president to personally come and receive such a historic document at this critical juncture and the uncivilised manner in which his office decided to receive such a dignified and high ranking delegation …” – adding that the behaviour showed the “punch of typical German arrogance and paternalism which we reject with the contempt they deserve”.

The Namibian leaders lamented how the delegation was confined to a street entrance, and not invited to sit down to present the document.

The activists dismissed the claim made by German officials that this affair was a matter between the Namibian government and private German institutions, noting that it was the German state army that committed the violence a century ago.

Ironically, their trip seems to have generated even more support from German elected officials and civil society.

On July 8, Norbert Lammert, a heavyweight of the Christian Democrat party, and president of the Bundestag, wrote a column in Die Zeit, stating that Germany perpetrated a “race war” and a “genocide” in Namibia.

The Namibian delegation has now set October 2 as the deadline for an answer to their demands for reparations.

The activists have since travelled to London where they met with a team of lawyers to ponder legal action against Germany, should it miss the upcoming deadline.

“The whole of Africa will be united behind the Ovaherero and Nama of Namibia, and Germany will be the new international exile state guilty of war crimes and crimes against humanity,” warned Chief Rukoro.