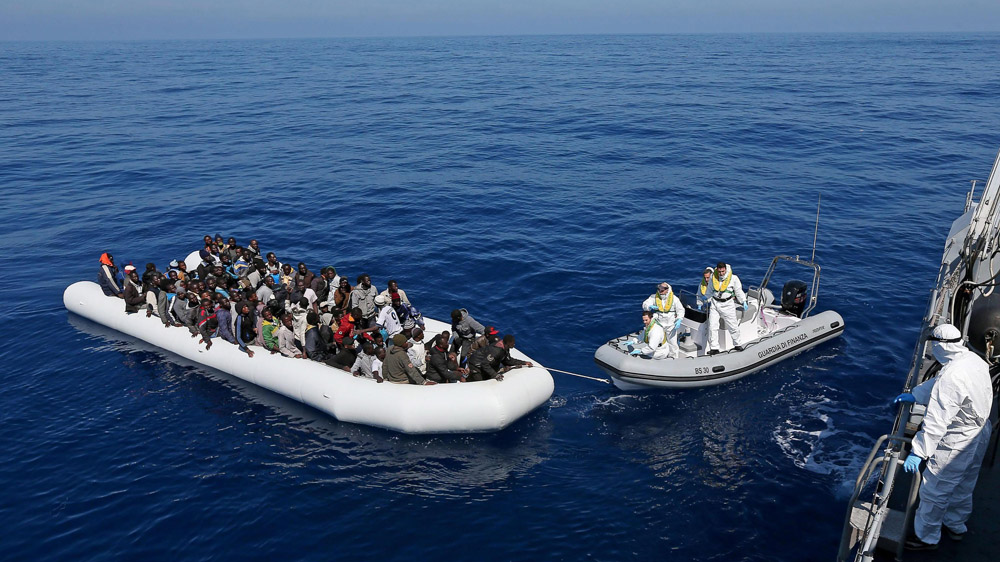 Sicily, Italy – “Hey Rasta!” a man calls across the street, the latest passer-by to greet their young neighbour outside his house. With long dreadlocks falling over his blue pyjamas, Italian flag flip-flops under his feet, Rasta reflected on his popularity.

“It’s very nice to be a cool man,” said the 25-year-old from Sierra Leone.

Despite appearing at home in his surroundings, Rasta is about as far from his former life in the Sierra Leonean capital, Freetown, as anyone could imagine. Until recently, a professional footballer by his own account and that of those around him, Rasta now finds himself living on a former US military base in Sicily.

Surrounded by dry farmers’ fields sown with silence, the Mineo base has been transformed into Europe’s largest centre for refugees.

About 3,000 people, including 30 children, now occupy the identical houses that give the base a model village vibe.

Although Rasta had no plans to come to Italy when he left Sierra Leone last summer, he is grateful to have reached Sicily. Some 800 others who made the same sea journey from Libya were not so fortunate, drowning when their boat sank on April 18.

Rasta was one of the few survivors, many of whom are now housed together in Mineo.

“Life here is better than Libya, but it’s not easy,” he said. “I’m going to school to learn Italian for one hour every day. The director is very concerned about us; he asks about us and visits us personally.”

Soon after the survivors’ arrival in April, the management gave each person a mobile phone and installed a TV in their shared house.

The latter was intended to give them a distraction from their memories of the shipwreck, the residents said, although they continue to watch news of boats travelling across the Mediterranean.

The deaths of their fellow passengers led to significant changes at the EU level over how to handle the current humanitarian crisis, including increased funding to sea rescue operations.

The impact is striking – while an estimated 1,300 people died or went missing in the Mediterranean during April, the monthly death toll has fallen significantly since then.

Rasta’s survival was a stroke of luck. More than 16 hours after leaving the Libyan coast, the overcrowded boat approached a stationary merchant ship, the King Jacob, which had been told of the smugglers’ vessel by the Italian coastguard.

Accounts of precisely how the ship came to capsize vary and are due to come to light with the trial of the accused Tunisian captain, now in a Sicilian jail after being identified by survivors.

Rasta said he was sitting next to the captain when the boat hit the King Jacob. “I was thrown against the big ship. I didn’t fall into the water. From there I could see people, some were swimming, ropes were thrown from the big ship.”

But not everyone could swim, and Rasta said he heard people screaming in panic as the stricken vessel sank.

His decision to board the boat to Europe was – like that of thousands of others who have taken the journey so far this year – a bid to escape worsening violence in Libya.

His route to the capital Tripoli had been in itself another form of escape, he said, fleeing the spread of the Ebola virus in Sierra Leone that killed his wife and sister.

After travelling through Gambia, Senegal, Mali and Burkina Faso, he met a friend in Niger who suggested they go to Libya in search of work.

There a Libyan man offered him a job as a shopkeeper, paying him a monthly wage until he was kidnapped on the way home from work.

“I saw a car coming, about five people took me with guns, I screamed and tried to stop them. They took everything and put me in a kind of prison. There were a lot of sick people; some died,” Rasta said, repeating a common narrative among those who fled Libya.

Whereas at least one shipwreck survivor has said he was taken directly from a kidnappers’ camp to the boat after paying for his freedom, Rasta said after a month he was able to escape.

He managed to flag down a car and was taken back to Tripoli by the elderly driver.

There, he moved in with a couple he had met in the city. After Tripoli became even more violent, they all decided to take the boat to Italy.

“There were fights every night. I went to the local banker, a Malian, and took my money. My friend did the transaction with the Arabs, then he woke me up and said, ‘We are leaving today,’” Rasta said.

Neither of Rasta’s travel companions survived the journey to Sicily.

Months after arriving on the Italian island where he knew no one, Rasta is now thinking of how to start a new life. Even though the Italian authorities have fast-tracked the shipwreck survivors’ asylum claims, the woefully slow process means they are still waiting to learn if they will be granted a visa.

Although Rasta is unsure of where he will go, he said his ambitions remain on the football pitch.