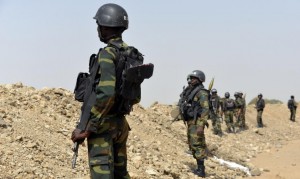 Cameroonian soldiers patrol in the town of Fotokol, on the border with Nigeria, on February 17, 2015, after clashes with Nigeria-based Boko Haram insurgents (AFP Photo/Reinnier Kaze)[/caption]

Nigeria’s neighbours Chad, Cameroon and Niger, which have all suffered attacks by Boko Haram, launched the force earlier this year to end a conflict that has claimed more than 15,000 lives since 2009.

The group has now widened its attacks from Nigeria’s Muslim-majority north to across the country and staged cross-border killings and raids in neighbouring countries.

“The president of Cameroon has authorised the deployment of 2,450 soldiers to join the multinational force,” said Edgard Alain Mebe Ngo’o, in a statement read out on national radio.

The group has stepped up raids on Cameroon recently staging bombings, killings and burning homes before fleeing across the border to Nigeria.

The multinational force is headquartered in the Chadian capital Ndjamena. It is expected to deploy imminently.

Benin, which also neighbours Nigeria, has pledged 800 soldiers for the force.