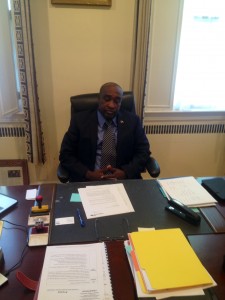 Ambassador Omar Arouna[/caption] In the wake of the recent celebration of the 55th independence anniversary of Benin on August 1st, Ambassador Omar Arouna says there is every reason to be optimistic about the future of the West African nation. Using American parlance, Ambassador Arouna describes the state of the Republic of Benin as it stands now to be very good. Benin remains a reference for democracy when it comes to Africa Ambassador Arouna said. Since 1990, Benin has had a string of successive elections with the kind of peaceful transitions that are elusive in most African countries. Currently into his second and last term of Office, current President Yayi Boni is expected to leave office next year. With constitutional amendments rife in many African countries, and President Yayi still relatively young, Ambassador Arouna was asked if he will respect constitutional term limits. President Yayi is a legalist and has worked tirelessly to foster and improve democracy in Benin, Ambassador Arouna said, expressing confidence that President Yayi will respect the constitution. He has done his absolute best for Benin in two terms and the date of elections is known in advance, with the government having little control in its conduct beyond providing funds for the electoral commission, he said. Benin under President Yayi Boni has made significant strides, said Ambassador Arouna. The President has improved on existing infrastructure, tackled corruption and sustained an environment where people can share different views without resorting to violence. Though small in terms of population, the strategic location of Benin makes it a very important country in the West African sub region Ambassador Arouna said. In addition to having the African giant Nigeria as a neighbor, Benin has a very important from which goods transit to other countries like Nigeria, Mali, and Niger. One of the legacies of President Yayi Boni will his engagement in sub regional and regional matters Ambassador Arouna said. https://soundcloud.com/multimedia-podcast/ambassador-omar-arouna-on-benin-at-55 President Yayi served as President of Ecowas, chaired the African Union, and participated in major forums like the last USA-Africa Leaders Forum. His country is currently working on the building of a rail road that will cut across a number of countries in the sub region he said. It is the commitment that has pushed President Yayi Boni to commit troops from Benin to join countries like Nigeria, Cameroon, Chad, and Niger in fighting against Boko Haram. Benin may not have been attacked, but the act is a show of solidarity with its neighbors, Ambassador Arouna said. A Benin that matters, is respected and plays an active role in international affairs is part of the legacy that President will eventually leave behind, Ambassador Arouna said. [caption id="attachment_20288" align="alignright" width="300"] 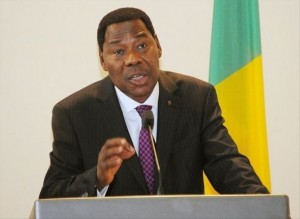 President Yayi Boni’s last mandate ends next year. One of his legacies is a country with international respect says Ambassador Arouna[/caption] Having lived in the USA for over twenty years prior to his appointment as Ambassador in 2014, Ambassador Arouna knows his way around Washington. In his own words he is interested in getting things done. He spares no effort when it comes to marketing Benin, a country whose potential he is working hard to introduce to American investors. It is in this light that a Trade Mission to Benin will be taking place from September 27-October 2. The trade mission will facilitate access and meetings between US Investors and the business community and authorities in Benin, Ambassador Arouna said. The investment climate in Benin is very friendly Ambassador Arouna said. It is easy to set up a business, the tax code is simplified and goods can be cleared from the port in Cotonou with ease. His country equally shares a number of values with the USA, and American investments will thrive in Benin he said. The focus of the Trade mission will be on the priority sectors of agriculture, energy and infrastructure, Ambassador Arouna went on. https://vimeo.com/135680725 Describing relations between Cotonou and Benin as excellent, Ambassador Arouna cited the number of times of President Yayi has visited as good illustration of the solid ties between Benin and the USA.The African Diaspora has a strong role to play in moving the continent forward Ambassador Arouna said citing himself as an example. [caption id="attachment_20289" align="alignleft" width="300"] 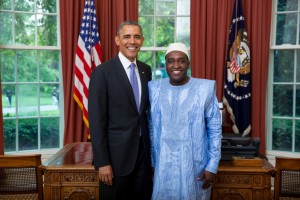 Ambassador Arouna with President Obama at the Oval Office, relations between Benin and the USA are solid he says[/caption] Though from a political family, Omar Arouna came from a private sector background to his current position as Ambassador. The experience garnered from the private sector and living in the USA are assets that facilitate his job of marketing Benin. Ambassador was barely in office for a few months when the USA-Africa Leaders’ Summit tool place in 2014, but he was active in the successive participation of Benin. With the active participation and support of President Yayi Boni, Ambassador Arouna successful worked towards the restoration of Benin into the good books of the Millennium Challenge Corporation, MCC. In addition to renovation work done at the Embassy, Ambassador Arouna has maintained an open door policy and visa services to Benin have been restructured to speed up delivery of services. Not all his compatriots appreciate the reforms that Ambassador Arouna is trying to bring to the Embassy in Washington, DC, and did express discontent in a recent letter. Ambassador Arouna said he has an open door policy and urged his compatriots to step up their game as people back home were looking up to them. Expressing the willingness to sort out any differences or clear any misconceptions, Ambassador Arouna tasked the Benin Community to set examples and standard that make their country proud and  meet the expectations of the people back home. *For more on the Trade Mission contact the Benin Embassy, email;info@beninembassy.us,Tel:2022322611]]>