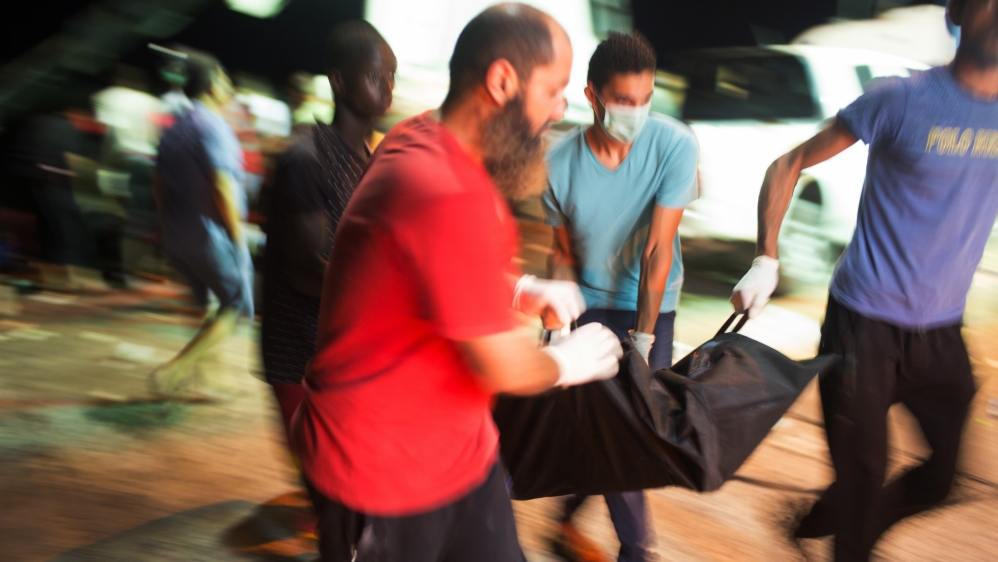 At least 82 people have been killed and more than one hundred others are still missing after a boat, reportedly packed with people from Africa and South Asia bound for Italy, capsized and sunk off the Libyan coast.

The Libyan Red Crescent said on Friday it had recovered 82 bodies. Nearly 200 had been rescued, the organisation said.

A security official in Zuwarah, a town in the North African nation’s west from where the overcrowded boat had set off, said that there were about 400 people on board.

The UNHCR, the UN Agency for refugees, in a statement, released on Friday, said there were about 500 people on board.

Sources told Al Jazeera that many of the dead had been trapped in the cargo hold when the boat capsized on Thursday.

The people on board had come from sub-Saharan Africa, Pakistan, Syria, Morocco, and Bangladesh, the Libyan security official said.

The UNHCR also announced on Friday that more than 300,000 refugees and migrants had risked their lives crossing the Mediterranean to Europe in the first nine months of 2015 alone.

About 2,500 people had died while making the perilous journey, the UNHCR said.

“This represents a large increase from last year, when around 219,000 people crossed the Mediterranean during the whole of 2014,” the UN said.

Zuwarah, Libya’s most western town located near the Tunisian border, is a major launchpad for smugglers moving refugees to Italy.

Cross-border smuggler networks exploit the country’s lawlessness and chaos to bring Syrians into Libya via Egypt or nationals of sub-Saharan countries via Niger, Sudan, and Chad.

Speaking to Al Jazeera, Anas El Gomati, who founded the Tripoli-based think-tank The Sadeq Institute, said Libya’s government does not feel it should be helping pay the bill to deal with refugees making their way to Europe as it is facing continued violence across the country.

“Libya’s security approach – and security apparatus – is now completely disorganised and in chaos,” he said.

“You have hundreds of different groups that are operating on the ground now, some of them taking advantage of a very, very chaotic situation – one of civil war.”


In a separate incident on Thursday, 71 refugees were found dead in a parked lorry on a highway in Austria near the Hungarian border on Thursday.

The refrigerated vehicle was found by an Austrian motorway patrol with fluids from the decomposing bodies seeping from its back door.

At a Geneva briefing, the UNHCR said that in another incident on Thursday, 51 people suffocated in the hold of a boat.

Survivors said they had been beaten to force them into the hold and then had to pay money to smugglers just to come out to breathe.

Last week, 49 people died in another boat’s hold after inhaling poisonous fumes, and on Wednesday 21 people are thought to have died after a dinghy with 145 on board got into difficulty, UNHCR spokeswoman Melissa Fleming said.