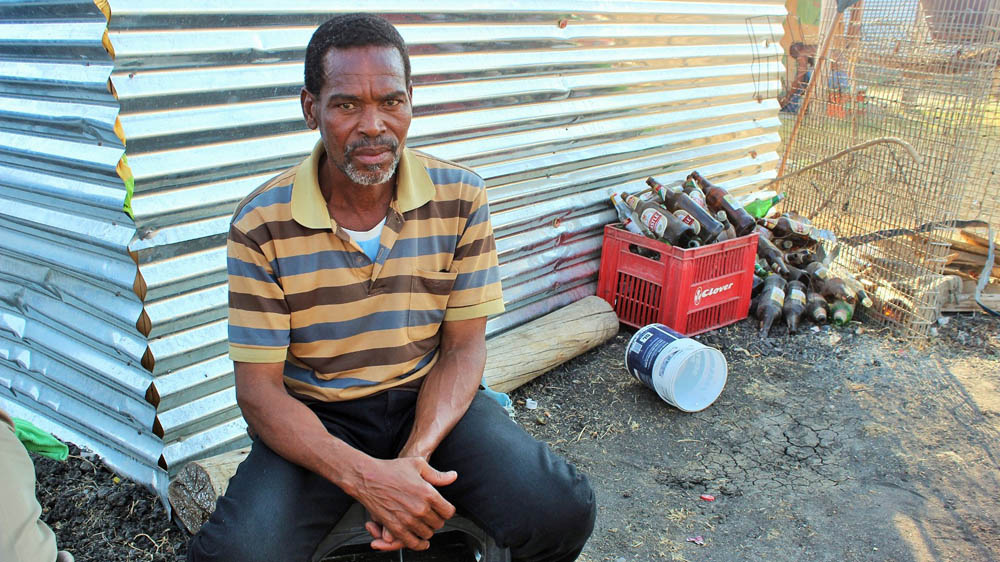 Marikana, South Africa – A pair of thin brown horses graze on patches of dry, yellow grass and thorny shrubs near a seemingly endless row of shacks patched together from sheets of corrugated steel.

This dusty maze of one and two-room shelters is part of Nkaneng, an informal settlement in South Africa’s platinum mining belt that sprang up shortly after the Marikana Massacre of August 16, 2012, when police shot and killed 34 miners during a wildcat strike.

Ten more people, including two police officers and two security guards, had been killed the week before.

Three years later, since a total of 44 people died, little has changed for many miners who waged one of the bloodiest strikes in South African history, demanding higher salaries and better living conditions from British mining company, Lonmin.

In September 2012, after two months of negotiations, Lonmin agreed to a settlement with the unions, but so far, only some groups miners, such as rock-drill operators, are receiving the monthly $968 after taxes, up from the pre-settlement amount of $580, that they had demanded.

Thandoxolo Ngongo, 38, who migrated from South Africa’s Eastern Cape region to work in the mines as a rock-drill operator, is one of the fortunate few. He said even though he receives an acceptable wage and an additional $155 as a monthly housing allowance, he still fears labour unrest could flare again because many miners are still paid below the settlement amount of $968.

“I was part of the strike, but I managed to run away, and I wasn’t shot like our other comrades,” Ngongo told Al Jazeera.

“Now I’m getting better money, 12,500 rand [$968] is my basic [salary], but not everyone gets this, and people want better wages. But I’m afraid if we strike again, the same thing could happen again with the police.”

After working for 16 years at Wonderkop, where the Lonmin mine is located, Ngongo still lives in the same blue, one-room shack, but dreams of moving to Marikana Extension 2, the new housing settlement where the government is building more than 2,600 dwellings as part of a three-year housing plan.

Built on 50 hectares of land donated by Lonmin in 2013 as a gesture of reconciliation after the miners’ deaths, the $36m project is intended to resolve the problem of Marikana’s settlements, but delays with building and lack of clarity over the allocation process have led to fiery disputes with the township’s residents.

Frustrated by the long wait, some miners have threatened to occupy the new buildings.

Meanwhile, the miners injured in the Marikana incident have found it even harder to make ends meet in recent years.

Out of work and reliant on benefits, Lungisile Madwansi still has a bullet lodged in his head three years after being shot by police from a helicopter above where the striking miners stood.

Recently, at a commemoration of the third anniversary of Marikana organised by the influential Association of Mineworkers and Construction Union, Madwansi spoke to a crowd recounting what had happened.

“I was shot in the head; our brothers died. But the struggle for 12,500 rand is not over. The Farlam Commission [a government-run inquiry into the massacre] was just a waste of time; it did not find anything wrong with what the government did. But [South African President Jacob] Zuma, and [police commissioner] Riah Phiyega are responsible for the deaths, and they must be accountable,” he said later in a telephone interview.

Although the Farlam Commission report was critical of police action, rights groups such as Amnesty International have gone further and called for the suspension of police officers responsible for the shootings.

Recently, 275 injured miners filed claims for compensation totalling $77.5m, and are considering legal proceedings for an independent inquiry into the events of August 16, 2012.

Similarly displeased with the government’s handling of the massacre, the families of the 34 deceased miners have lodged a civil lawsuit demanding compensation for grief and loss of income from the government, police, and Lonmin.

Nosihle Ngweyi, the widow of miner Michael Ngweyi, believes that the amount of assistance provided by the state has been insufficient, and hopes the lawsuit will succeed.

“It feels as though Lonmin and the government don’t care about the families. For many of us life is very tough since we lost our husbands, and we have no answers who killed them. Phiyega should resign for that, and we want the government to give us the money to help improve our lives,” she said while speaking at the Marikana anniversary.

The event was attended by prominent religious and political leaders, including a representative of the ruling African National Congress party, as well as Julius Malema of the Economic Freedom Fighters and Mmusi Maimane of the Democratic Alliance.

Echoing Ngweyi’s sentiments, Naadira Munshi, a researcher at the Socio-Economic Rights Institute, one of the legal organisations representing the families, criticised what she described as Lonmin’s general lack of support of miners’ families.

“LonMin has only allocated those with individual family members who are working in Marikana housing at the hostel. Their families back at home in the Eastern Cape, Swaziland and Lesotho are struggling,” she said .

The families have also filed a complaint against the police, requesting a formal apology from senior security figures.

National police spokesman Brigadier Solomon Makgale told Al Jazeera the department would respond to the lawsuit within the stipulated 20-day period, which ends in the first week of September.

“We have received the civil claim, but we have not received communication regarding demand for a formal apology. There will be a response from the police services once we have gone through all the claims. We will deal with the issue sensitively, and do everything possible to conclude the matter in as relatively painless a manner as possible,” Makgale stated.

Munshi, hoping that an apology could bring closure for families of the killed miners, stressed that the Farlam Commission report did not absolve the police of wrongdoing, and said a successful lawsuit – possibly resulting in an official apology – could have far-reaching outcomes.

“We have asked for an apology [from the police], and we can only hope that we will get one. The families want an apology from the state, and they want to be compensated for the deaths of their loved ones.”

While the survivors of the Marikana massacre continue to struggle to get by, a lengthy battle is set take place in South Africa’s courtrooms – and it will likely be a long time before the grievances of the injured and aggrieved are finally resolved.

The post After Marikana, little has changed for miners appeared first on African Media Agency.