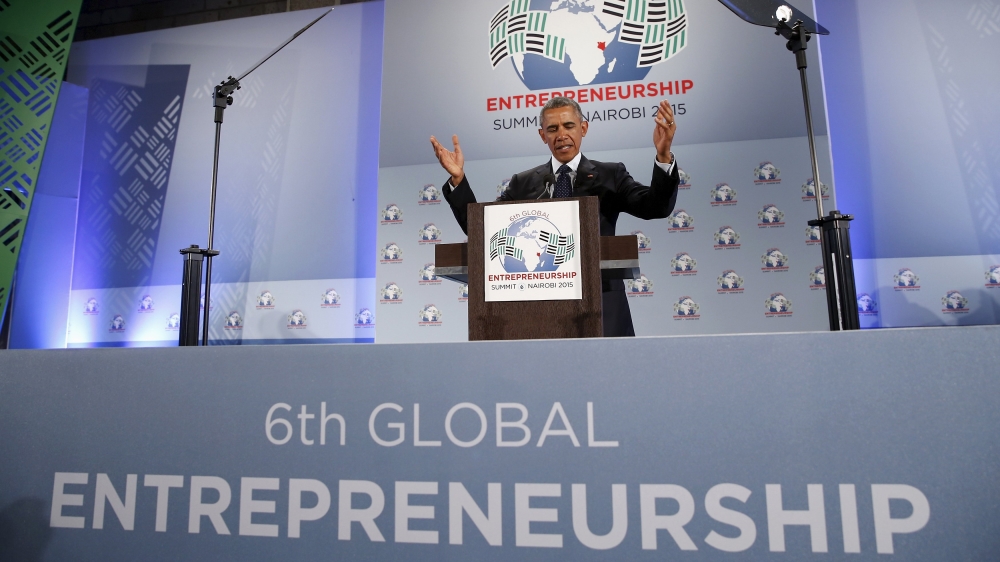 United States President Barack Obama’s recent trip to Kenya and Ethiopia featured an appearance at the 6th Global Entrepreneurship Summit, the first of such meetings to be held in sub-Saharan Africa.

This event was meant to shine a spotlight on Africa as a growing centre of innovation .

While entrepreneurship is increasingly framed as a vehicle for poverty alleviation and development , it is not the path to prosperity its proponents claim it to be.

Obama pushed entrepreneurship to the top of the US’ engagement agenda during a historic speech to the Muslim World in Cairo in 2009.

The consequence has been an exceptionally business-oriented US foreign assistance approach in the African context. The entire gambit of foreign assistance programmes, from agriculture to healthcare, is increasingly framed in entrepreneurial language.

US companies are now also seen as development partners who work in tandem with US international development programmes to, for example, commercialise African agriculture .

The irony is that Obama’s embrace of the business community on the domestic front is much more cautious and nuanced.

The images of African development have also shifted in tandem with the evolving foreign assistance ethos, from farmers working in fields to youth gathered around computers, or business people in smart suits.

While the change may seem subtle, it is significant because the focus has transitioned from the rural poor and marginalised in African societies to privileged, well-educated urbanites.

While I appreciate depictions of Africans as smart, urbane technophiles – because it disrupts the traditional and tired poverty narrative – I am also concerned that outsiders are deepening divides in African societies by aiding those who least need assistance.

Ethiopia is a classic case of an African country that’s “open for business”.

It has experienced a phenomenal growth rate in recent years and been referred to as an African lion, a corollary to Asia’s economic tigers.

The problem is that outsiders largely deal with elites in the country, leading to, for example, commercial agricultural projects and land grabs that marginalise the poor .

It is as if trickle-down economics , made famous by former US President Ronald Reagan in the 1980s, has made its way into the development arena.

The implication is that the poor are beyond hope and, as such, our best shot at developing African economies is to help those who are already privileged.

The development target du jour is now the entrepreneur who will invest wisely, create jobs, and lift all African people.

I’m not buying it. Trickle-down economics laid the foundation for a growing economic divide in the American economy, and I doubt it will fare any better in the African context.

Africans are some of the most entrepreneurial people I know. Go to any African market and you’ll realise that local merchants have their trade down to a science.

While it is true that lack of access to credit and investment capital are limitations on the African entrepreneurial spirit, I am confident that the private sector will fill this void.

What I am less confident about, as a long time scholar of African development, is that the basic fundamentals are in place for environmentally and socially sustainable development.

These foundational concepts include peace and stability, sound governance and rule of law, as well as equitable access to basic healthcare and education.

It is as if we have given up on these very challenging, yet basic, fundamentals of development in favour of the deceptively low hanging fruit of glitzy, individualistic entrepreneurialism.

What good is a lively, innovative marketplace if a weak state cannot guarantee the safety of its people or govern in a fair and predictable fashion?

Furthermore, the developmental impacts of investment and entrepreneurial activity will always be limited if only a small segment of the population has sufficient education, skills and training.

Microcredit, for example, has been heralded as a tool allowing women and other marginalised groups to access loans to develop new businesses and income flows.

While this approach works well for middle-income Africans who have the margin of wealth necessary to take on financial risks, and the know-how to capitalise on new technology, it rarely works for the truly poor.

In fact, the poorest recipients of these loans often endure great hardship to simply pay them back, yet see no measurable improvement in their economic situation.

African leaders, journalists, and public intellectuals will be doing their people a considerable service if they critically and cautiously parse the latest development craze focused on entrepreneurialism.

By simply looking at the US history they will learn that much of the success of the private sector has been buttressed by considerable public investment in education, research, and infrastructure.

The idea that the US was solely built by rugged, entrepreneurial individuals is a myth. Obama himself has admitted this, and was severely critiqued by Republicans for it in 2012, when he argued that individual success is a product of the efforts of many .

I whole heartily agree with Obama’s 2012 assessment of the relationship between individual success and public investment. Now, I would like to see a bit more of this collective ethos reflected in US foreign assistance policy to Africa.