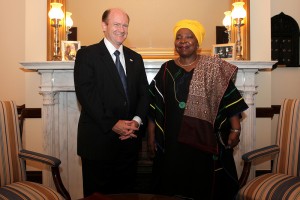 The Chairperson of the African Union Commission (AUC) Dr Nkosazana Dlamini Zuma today held wide ranging discussions with a high level delegation from the United States, aimed at enhancing relations and cooperation between the USA and Africa. This is the fourth such meeting to be held between the two sides. In the meeting, attended by several US senators, house representatives and representatives of the private sector, as well as Commissioners of the AUC, Dr Dlamini Zuma briefly updated the visiting delegation on the key possible areas of enhanced cooperation. Top of the agenda was health, where the Chairperson spoke of the need for the continent to strengthen its health systems. She observed that the Ebola outbreak that took the lives of thousands of Africans provided valuable lessons for the continent for the future and has also contributed to the development of an experienced corps of health workers. However, she added that the long term solution to strengthening African health systems is to strengthen its economies. On peace and security, Dr Dlamini Zuma noted that the AU is using its peace and security architecture in conflict prevention, as well as intervening where conflicts break out. The continent, she said, has taken a decision to silence the guns so that as to develop a culture of resolving conflicts through dialogue and engagements. But, the Chairperson indicated the need for adequate and sustainable resources to execute its mandate of restoring peace. “Our biggest contribution to peace and security are the men and women on the ground. There is no lack of solidarity and determination from Africa. But we lack resources and equipment. What would be ideal is to have more predictable and sustainable resources”, she informed the visitors. Another critical factor brought up for discussion was the development and mainstreaming of youth and women in Africa. “If we don’t pay attention to youth it will be at our own peril”, Dr Dlamini Zuma cautioned, adding that the AU is concentrating on developing higher learning and skills development. She also called for more access to finance and resources for women engaged in agriculture and agro processing. The AUC Chairperson noted the use of clean energies as an area of potential cooperation between the USA and Africa, especially at this time that the continent is pushing for more development and prosperity. In order to avoid being big polluters, she said the continent should be assisted to leapfrog the use of fossil fuels and adopt renewable energy instead. The blue economy was another area brought up in the discussions, with the Chairperson saying that the continent has launched an African decade of oceans. African women, she said, have launched an organisation of women in maritime so as to be part of the development. The Chairperson also took time to explain that African Union summits offer immunity to those who attend, in the same way that pertains to delegates to the United Nations general assembly meetings. This remark was by way of explaining the attendance of the Sudanese President Mr Omar Al Bashir at the last AU summit held in Johannesburg in June this year. Other issues discussed in the meeting related to good governance, democracy and human rights, the fight against corruption, wildlife management, free movement of people and goods across the continent, infrastructure, climate change and reform of the United Nations to ensure that Africa gets permanent representation on the Security Council. In response, the head of the US delegation Senator Chris Coon expressed his appreciation for the time taken by the AUC leadership to discuss such a broad range of issues. The US ambassador to the African Union Mr Reuben Brigety attended the meeting. Apart from the Chairperson, the AUC delegation consisted of the Commissioner of Political Affairs Dr Aisha Abdulahi and the Commissioner of Social Affairs Dr Mustapha Sidiki Kaloko and other senior members of the Commission. *AU]]>