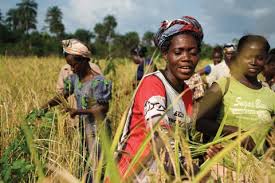 The office of the Special Envoy on Gender (SEOG) and the Department for Agriculture and Agro-industry (OSAN) of the African Development Bank (AfDB) launched a new report, “Economic Empowerment of African Women through Equitable Participation in Agricultural Value Chains” on Thursday, August 27 at its headquarters in Abidjan, Côte d’Ivoire. The event gathered high-level participants, including stakeholders from both the private and public sectors from the countries and sectors examined by the report – cocoa, coffee, cotton and cassava sectors in Côte d’Ivoire, Ethiopia, Burkina Faso and Nigeria, respectively. “This report prepares the ground to empower women, to take a leading role in the business of farming and agricultural value chains, regionally and globally”, said Donald Kaberuka, President of the African Development Bank. Agriculture in Africa is poised to remain one of the most important economic sectors, accounting for around 25% of the continent’s GDP. Over 60% of its citizens rely on agriculture for some form of income. To transform the sector, the economic empowerment of women through boosting their productivity and raising their participation in commercial and higher value-add activities in agriculture is central. Women make up almost 50% of the agricultural labour force in Sub-Saharan Africa. A total of 62% of economically active women in Africa work in agriculture, making it the largest employer of women. In some countries, such as Rwanda, Malawi and Burkina Faso, over 90% of economically active women are involved in agriculture. “African women feed the continent and they can feed the world, too. But we must close the wide gap in wages and agricultural yields between men and women if Africa is to achieve full economic transformation,” said Geraldine Fraser-Moleketi, the AfDB’s Special Envoy on Gender. The report highlights five major constraints that can limit women’s productivity and full inclusion into the agricultural economy: lack of access to assets, lack of access to financing, limited training, gender-neutral government policy, and time constraints due to heavy domestic responsibilities. The report highlighted three broad areas for action that could begin to address the specific constraints women face in each focus country:

The role of women is largely limited to the unskilled parts of production: few own the land on which they work, they are rarely remunerated for their labour and often do not control the income generated from the sale of agricultural produce. For example, in Côte d’Ivoire, the report estimates women account for 68% of the labour in cocoa production, but receive only 21% of the income. Similarly, in Ethiopia, women account for 75% of the labour in coffee production and receive only 34% of the income. This report will help to identify areas that the African Development Bank (AfDB) and its partners could target to empower women economically through agriculture as the Bank implements its Gender Strategy (2014-2018). *Source AFDB]]>
0