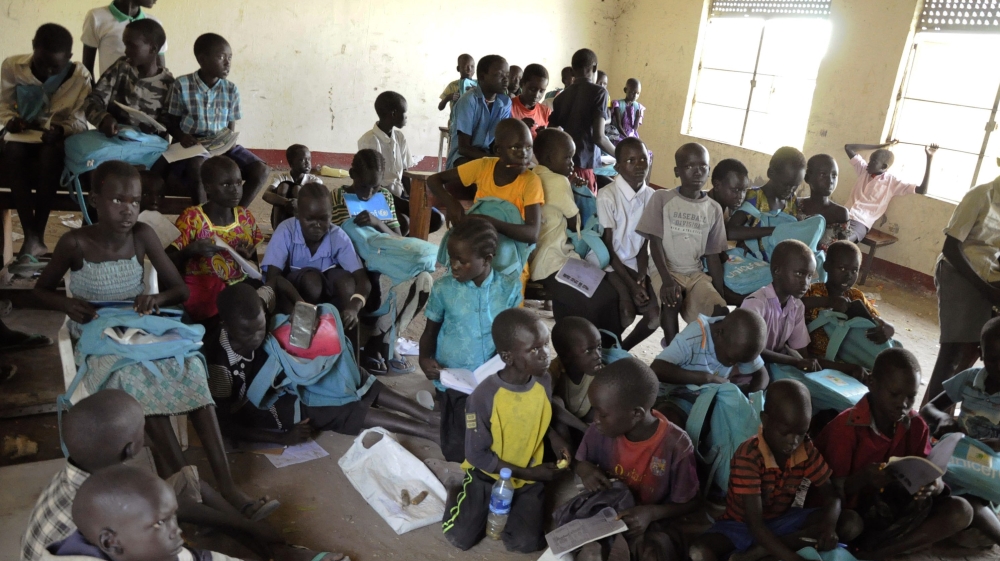 Seventeen-year-old Lina Juan Poni has cried and begged her mother to buy her a new pair of socks and shoes.

But unlike many of her teen peers, her pleading wasn’t an issue of keeping up with the fashion of the moment.

For Poni, it has been the difference between going to school or staying home.

Poni told us that she has repeatedly interrupted her schooling because her widowed mother couldn’t afford to replace her socks and shoes.

“When I can’t come to school, I get very upset. I cry for days for my mum to get me socks and shoes.”

While the military and the rebels are fighting for control of South Sudan, each day, children such as Poni, are fighting to get an education.

In a country where only 27 percent of its population can read, that’s no small battle.

Poni walks four hours to and from school each day. She works with her mother in the morning selling falafel and alcohol at the market. Then, she goes to school for three hours in the afternoon.

Poni is older than many of her primary school classmates. If she finishes primary school, she’ll have accomplished something most children never achieve in South Sudan. According to the United Nations Childrens’ Fund, UNICEF, fewer than 10 percent of all the country’s children will complete primary school.

As a girl, going to school is hardly a given. Only 35 percent of the students in South Sudan are girls.

The deputy headmaster at her school, Okot Santos tells us, when it comes to educating girls, parents are the biggest obstacles.

“They look at girls as bride’s price, as bride’s wealth, as money. So, it’s useless to educate girls. Parents only focus on the boys. Educating the girls, is educating the nation.”

We visited Poni’s private Catholic school in the capital, Juba.

Students were crammed into classrooms, elbow to elbow. There was no equipment. Just a chalkboard and one textbook used by the teachers.

Santos tells us they don’t have any money to provide students with textbooks. He told us when South Sudan gained its independence four years ago, there were promises of vast improvements in the educational system such a new curriculum, additional equipment, the construction of more schools and providing teacher training. Instead, UNICEF says the civil war which began in December 2013, has already erased what little gains had been made.

An estimated 400,000 children have been unable to go to school due to the conflict.

Poni is determined to become the first woman in her family to finish primary school. She’s lucky because her mother wants her to keep learning and to have the education she never had.

Poni says: “I’m only focusing on ensuring that my mum’s efforts are not in vain because sometimes we sleep with empty stomachs. Right now, I see men running the country. If women get an education, they can help run the country.”

The post A young girl’s struggle to go to school appeared first on African Media Agency.