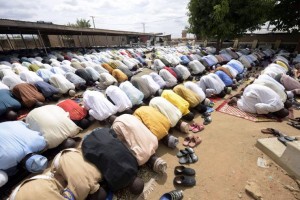 Muslim men pray to mark the holy month of Ramadan at Jimeta Central Mosque in Yola, Adamawa state, in northeast Nigeria, June 19, 2015. Adamawa state has earmarked more than $1 million for “prayer warriors’ to seek divine intervention to end Boko Haram’s insurgency. Pius Utomi Ekpei/Agence France-Presse/Getty Images[/caption] A local government in northeast Nigeria has earmarked more than $1 million for “prayer warriors” to seek divine intervention in the fight against Boko Haram’s insurgents. The Adamawa state government announced Friday that a budget of 200 million Nigerian naira would be spent in part on prayers calling for an end to the region’s security challenges, the News Agency of Nigeria reported via Premium Times, a Nigerian newspaper. “We have earmarked N200 million for prayers to seek for Allah’s intervention in tackling the Boko Haram menace and other insecurity challenges threatening the stability of the state,” Alhaji Abdurahman Jimeta, chief of staff of Adamawa state, told the News Agency of Nigeria during a news conference in Yola, the state capital. Jimeta added that some of the budget would go toward assisting local vigilance groups and security operatives. Local hunters and armed vigilantes in Adamawa have stepped up to aid Nigerian troops fighting against Boko Haram militants in the border region between Nigeria and Cameroon. Adamawa state, along with others in northeast Nigeria, has suffered for years from Boko Haram’s violent insurgency. Most recently, suspected Boko Haram fighters killed at least eight people Sunday during an attack on Kulbachuwa village in Adamawa’s local government area of Madagali, the Nigerian newspaper Daily Post reported. The village is located near Adamawa’s border with Borno state, the heartland of the Islamist militant group. Sunday’s raid was the latest in a series of attacks by Boko Haram in the region between Borno and Adamawa states. Since Nigerian President Muhammadu Buhari took office in May, pledging to defeat the extremist group, Boko Haram has unleashed a wave of renewed violence in Nigeria as well as neighboring Chad, Cameroon and Niger that has claimed hundreds of lives. Boko Haram’s bloody insurgency has left more than 15,000 people dead since 2009. The militants have occupied territory in northeast Nigeria and have burned dozens of villages to the ground, which has triggered a refugee and internal displacement crisis in the region, the United Nations said. *Source IB Times  ]]>