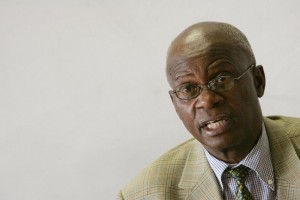 Zimbabwe Finance Minister Patrick Chinamasa, seen in Harare on April 9, 2008, when he was the justice minister, stressed that the power project funded by China will ease the country’s current electricity woes (AFP Photo/Alexander Joe)[/caption]

Harare (AFP) – A Zimbabwean company on Thursday signed a $1.1 billion agreement with the China State Construction Engineering Corporation (CSCEC) to build a 600-megawatt thermal power plant, a move expected to ease power cuts in the country.

“This first phase is a 600 MW coal fired plant, it’s the first of four phases so it’s a huge project for Zimbabwe. One of the biggest projects Zimbabwe has ever done,” Stuart Perry, chairman of the Pan-African Energy Resource, PER Lusulu Power, said at a news conference in the capital Harare.

He added that construction should begin early next year with the first phase completed in 2019.

Huang Changbiao, a representative of CSCEC, said his company was happy to be involved in the project.

“It is our honour to help solve the power problem in Zimbabwe,” Changbiao, the general manager for CSCEC east and southern Africa said.

Zimbabwe’s Finance Minister Patrick Chinamasa said that PER Lusulu Power company was a consortium of local and foreign investors without giving details.

The minister stressed that the power project funded by China will ease Zimbabwe’s current electricity woes. Blackouts of up to eight hours a day are a common occurrence in many parts of the country.

“It is a very important project which seeks to address the infrastructure gap in the power generation sector,” Chinamasa said. “In total overall the project is to develop 2,000 MW of power and they are going to use coal concessions which are found in the area.” This year Zimbabwe’s power utility budgeted $5 billion (4.6 billion euros) for projects to scale up electricity generation, as the country battles a crippling deficit.

Projects lined up included the $1.5 billion joint project with China to build units at the Hwange thermal power station, a $533-million expansion at Kariba hydro-power station and solar, gas or diesel generators in the eastern border town of Mature.

Zimbabwe is recovering from an economic slump that lasted over a decade and the utility has been battling to raise money for the maintenance of its ageing power stations.