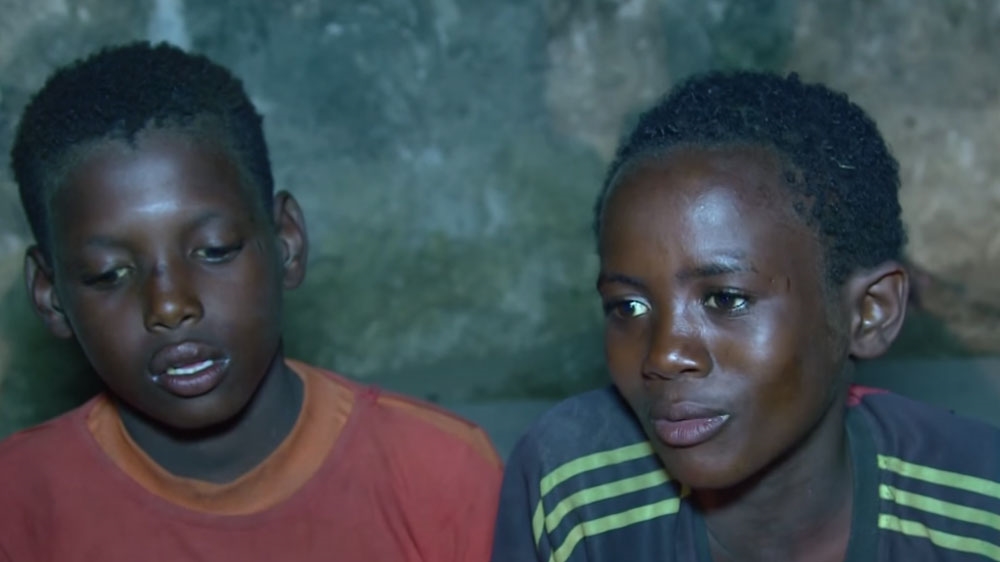 Mogadishu, Somalia – As the sun sets behind the blue waters of the Indian Ocean and the traffic disappears behind Mogadishu’s big gated houses, a group of young boys, all at or under the age of 13, jump out from a rusty, abandoned bus onto a dark, dusty sidewalk.

They are in search of shelter to hide from the night’s cold.

This group of boys is part of a growing number of children who have been left on the Somali capital’s streets to fend for themselves. Hungry and feeling lost in one of the toughest cities in the world, they spend their days trying to stay out of harm’s way.

Thirteen-year-old Deerow Fuad leads a group of three boys who are rummaging through a heap of rubbish under a dark bridge in search of thrown-away boxes.

They plan on using these as mattresses to cushion their tiny bodies from the concrete sidewalks on which they will sleep.

“At night it is cold. There are explosions. You can hear gunshots,” Fuad told Al Jazeera as he sat on a box by the side of the road.

He was wearing a worn-out T-shirt to keep him warm from the cold gusts blowing in from the sea.

None of the boys currently go to school, and although all their parents are alive, they have not seen or spoken to them in months.

Fuad has formed a tight bond with two other street children, Abdi Rizaq and Mohamed Abdullahi. Their days are filled with the struggle to find something to eat.

‘No one knows if we are dead or alive’

Abdi Rizaq is sandwiched between Fuad and Abdullahi on the flattened boxes, under the watchful glowing eyes of stray cats. He is wearing a torn, oversized AC Milan football club jersey, and looks far younger than most 13-year-olds.

He has not seen his parents, who are still alive and have lived in the city for more than six months.

Abdi Rizaq was left to fend for himself, because his parents could not afford to provide for him.

“No one knows if we are dead or alive. Every day and night we spend our time thinking how we can better our lives. Only God knows if we will make it to tomorrow. Anything can happen to us,” Abdi Rizaq told Al Jazeera.

He said his parents lost everything following the 2011 famine in the Horn of Africa, which left almost 260,000 people dead – almost half of them children – in this country with an estimated population of 10 million.

Abdi Rizaq was born in the midst of Somalia’s long and bloody civil war to a poor family in Mogadishu. He knows that life has dealt him a tough hand, but he is not bitter.

“My family is too poor to look after me. So I ended up on the streets to find something to eat. I’m young and healthy, and have my whole life ahead of me. I hope I won’t be living on these roads for long,” Abdi Rizaq said, looking down at his shoeless, sand-covered feet.

‘We are too young for this life’

Mogadishu is still recovering from the more than two decades of civil war that erupted after the collapse of the government of long-time ruler Siad Barre in 1991.

With the return of a fragile peace, Somalis from abroad have flooded back into the country, bringing with them wealth and financial resources. As new mansions are built and supermarkets open across Mogadishu, Fuad and his friends watch with empty stomachs, and wish they had a part to play in the city’s boom.

“All we want is food, a place to sleep and to go to school. This life we are living is hard. We are too young for this life,” Abdullahi said as the city woke up, and as the boys prepared for another day of hardship ahead.

Young boys such as Abdullahi are ubiquitous in Mogadishu’s parking lots and areas where people gather.

They ask drivers if they can dust their vehicles in return for the equivalent of $0.05. If the vehicles are not in need of dusting, they offer a shoeshine, carrying a dirty piece of cloth or an old paint can containing a brush and shoe polish.

On many occasions they are chased away.

“You have to be careful who you approach. Some people can beat you up or throw stones at you for no reason. And the nice ones will ask you to clean their vehicle or shoes. The more vehicles or shoes you clean, the more food you can buy to eat,” Abdi Rizaq explained.

On a good day, they eat one meal, which is often leftover, foul-smelling rice or pasta thrown away by one of the city’s many restaurants.

“At night before they close, we go to restaurants and ask if they have food they want to throw away. Sometimes they give us that food, and sometimes they tell us to go away,” said Fuad, the tallest of the three boys.

‘They can be brainwashed’

The Somali government, which has its hands full with the touch-and-go security situation, estimates that there are some 5,000 young boys on the streets of Mogadishu.

“It is our responsibility to look after and improve the welfare of these children. We are trying to create centres to house these children. But we have no funds. On many occasions we have been promised funds, but we have not yet seen any,” Mohamed Abdullahi Hasan, the country’s minister for youth and sports, told Al Jazeera.

RELATED: Living at the ‘mercy of the rain’ in Somaliland

But if nothing is done for these hungry, unemployed young boys, it could become a security challenge.

“They do worry us. They can be brainwashed or given a small amount of money, and they will be ready to do anything. That is a big concern for us,” said Hasan.

While many laud the improving security situation in the Somali capital, thousands of young boys like Fuad feel neglected and left behind.

“We are the future of this country,” said Abdi Rizaq. “But we don’t feel like are part of it. Not yet.”

The post The lost boys of Mogadishu appeared first on African Media Agency.